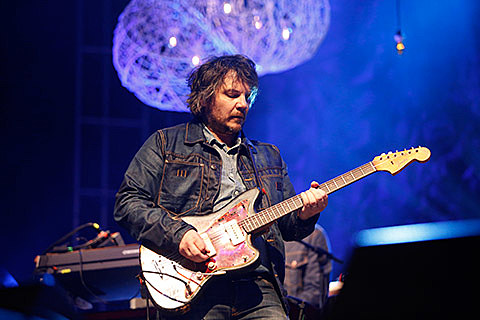 Wilco frontman Jeff Tweedy will be hitting the road this summer with a series of North American tour dates. Joining Tweedy is his newly formed backing band composed of his 18-year old son Spencer (The Blisters, Mavis Staples) on drums, Jim Elkington (The Horse's Ha, Eleventh Dream Day) on guitar, Darin Gray (Dazzling Killmen, Brise-Glace) on bass and Liam Cunningham (Marrow) on keyboards. Tweedy and his band will be playing Austin at the Texas Music Ballroom on June 22 and Dallas at the Majestic Theatre on June 24. Tickets for the Austin show and the Dallas show go on presale Wednesday (5/21) at 10 AM with a general on-sale beginning Friday (5/23) at 10 AM.

The tour also hits a few festivals including Taste Of Chicago and Newport Folk Festival. For this tour, Jeff is promising songs from his upcoming solo album (release date TBA) along with songs from the Wilco/Uncle Tupelo catalog. All dates are listed below.

He was also recently featured on the season finale of Parks and Recreation and the IFC series Portlandia.

All dates are listed, with a video, below...