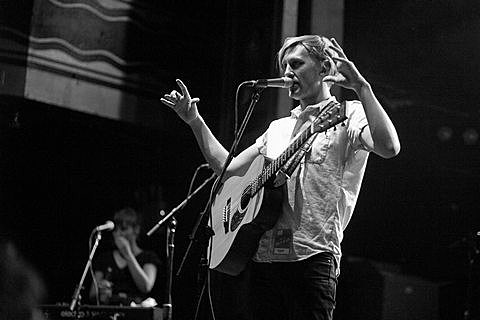 Waterloo Records, who are celebrating 30 years (!), are housing another slew of free, in-store special events this month and beyond, including obligatory Record Store Day festivities.

Rising from the ashes of his band Port O'Brien, folkster Van Pierszalowski's latest project WATERS is set to play Waterloo this evening (4/13) at 5pm before opening for Delta Spirit at Emo's East.

In addition to all the rare goodies you'll have a chance to buy on Record Store day next Saturday (4/21), Waterloo is hosting an appearance by Garbage that afternoon, where the band will be meeting with fans and signing autographs, potentially making that exclusive Record Store Day Garbage 7-inch of their new album's first single, "Blood For Poppies," extra special. The band will also play a sold out gig at La Zona Rosa later that night as part of their current tour.

Austin's own rabble-rousers Heartless Bastards will also perform a free in-store act at the record shop on Wednesday, April 25, but not before they play La Zona Rosa on April 20. Check HERE for more HB tour dates and live pics.

Check below for an entire list of currently-announced Waterloo Records events...