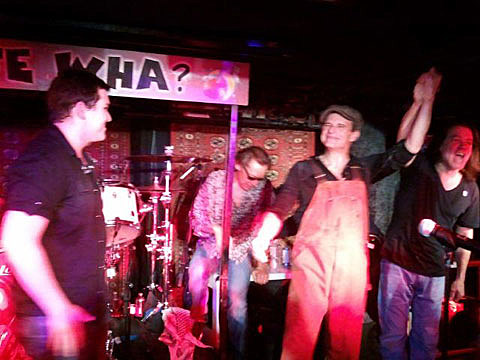 Van Halen recently announced a 2012 tour with original frontman David Lee Roth. That tour doesn't exactly come to Austin but it hits three other Texas cities in June. They'll play American AIrlines Center on June 20 in Dallas, AT&T Center on June 22 in San Antonio and Toyota Center on June 24 in Houston. Tickets are not on sale yet but check LiveNation for updates. All dates at BrooklynVegan. a NEW Van Halen song with DRL can be listened to and watched below. What do you think?

In other 70s/80s hard rock and metal news, Megadeth and Motorhead are kicking off the 2012 Gigantour with Volbeat and Lacuna Coil this month. It comes to Austin on March 3 at ACL Live at the Moody Theater. Tickets go on sale Friday (1/13) at 10 AM. All dates at BrooklynVegan.

Graveyard aren't exactly a 70s metal band, but they sound a lot like one and they've also got an Austin show coming up as part of their US tour with Radio Moscow which hits Mohawk on January 25. Tickets are available. All dates at BrooklynVegan.

Another kinda-sorta metal show happens at the same venue when Scott Kelly (of Neurosis) plays Mohawk on February 19 as part of his tour with Eugene Robinson (of Oxbow). Ancient VVisdom are on the bill too. Tickets are available. All dates at BrooklynVegan.