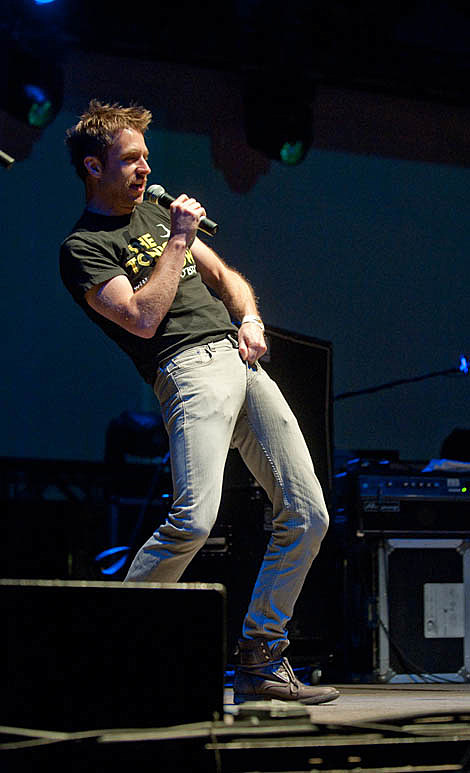 Who caught Demetri Martin's recent show at The Paramount? How was it? What about Neil Hamburger? Here are some more upcoming Austin comedy shows (by comedians we're fans of), many of which will go down during SXSW this year.

As mentioned on Twitter, Pete Holmes is coming to Austin to to play the CapCity Comedy Club six times, between February 15th through the 18th. Tickets are available now.

Also coming to Austin (the same day as Kevin Nealon) is Chris Hardwick (with Jonah Ray & Matt Mira) for an edition of Nerdist Podcast Live! at the Stateside Theatre at the Paramount. Tickets and more info at the link

Anthony, Pete and Chris were all also here in 2011 for SXSW.

And speaking of SXSW and live podcast performances, SXSW just announced eight live podcasts (including Pete Holmes), and the expansion of their comedy programming:

South by Southwest is excited to announce its lineup of live podcasts, plus a preview of this year's expanded comedy programming, which runs throughout the Interactive, Film, and Music festivals. SXSW Comedy runs from March 10-17, 2012 in Austin, Texas.

WTF with Marc Maron
Doug Loves Movies with Doug Benson
Comedy Bang Bang with Scott Aukerman
You Made It Weird with Pete Holmes
The Smartest Man In The World with Greg Proops
Sklarbro Country with Jason and Randy Sklar
Who Charted? with Howard Kremer and Kulap Vilaysack
and Kevin Pollak's Chat Show

Also new for 2012, programming will feature two additional nights of comedy showcases, two new venues, and comedy-focused panels in the Interactive Conference. The complete lineup of participating talent and the full schedule will be announced soon here at sxsw.com/comedy.

SXSW Comedy Showcases
Eight straight nights of stand-up start on Saturday, March 10, featuring some of the biggest names in comedy alongside up-and-coming acts from across the country. This year, SXSW Comedy will expand to multiple venues, offering more shows, seats, and performers than ever before.

SXSW Comedy Panels
A track of comedy-focused panels will debut as part of the SXSW Interactive Festival, exploring topics from technology to the artistic process. Interactive panels will be held from March 9-13 at the Austin Convention Center, and are open to all Interactive, Gold and Platinum badgeholders.

Venues and SXSW Comedy on the Next Stage
Throughout the festival, comedy shows will take place at two downtown Austin venues, the legendary Esther's Follies and The Velveeta Room. This year, we're also bringing some of our favorite shows to the Next Stage, located in the SXSW Trade Show at the Austin Convention Center from March 12-15.