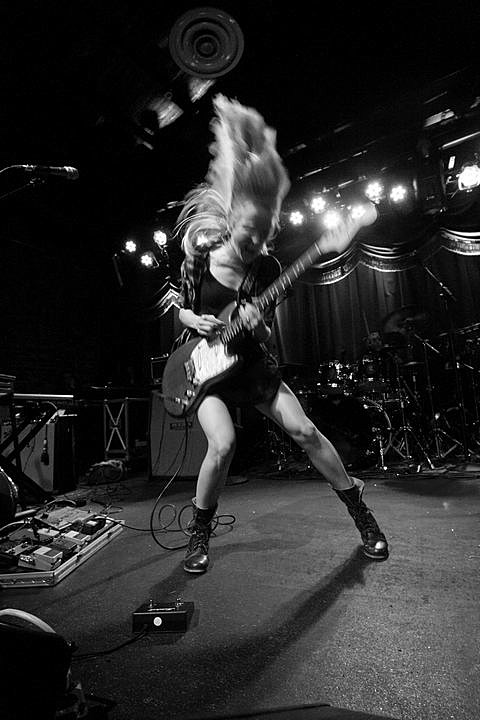 In case you haven't heard by now, Lauren of Ume wrote and released a song for Esme. The song is called "Gleam" and "100% of all sales will be donated to Esme's family or you can donate directly at forouresmeb.blogspot.com". Read more about it, letter from Lauren included, and listen to the song below.

Ume are heading on tour with Cursive in February, but first: Oh Snap!, the annual fest in "in memory of Sergio Machado, a dear friend and musician who was killed in a car accident in his home country of Mozambique." The money raised goes to the Sergio Machado Memorial Scholarship. Taking place at the Parish and Beale St. Tavern from January 26-28, Ume play the final day at the Parish at midnight. The whole schedule and tickets are at the fest's site. The full lineup is with Ume's Esme song, below...

I had the honor of working with Esme for 4 years at Girls Rock Camp Austin. We rarely encounter people so inspiring -- whose compassion and joy are contagious. Esme was the unique gift of a person who could ease a new girl's fear at Rock Camp with a hug -- who a Waterloo customer remembers for her smile -- who a local band remembers for rocking out in the front row. Esme was the epitome of awesome.

The day after I heard the news she was gone, I went into Resonate Studios with Louie Lino to track a song I'd been holding inside for a long time and that I wanted to dedicate to Esme. Louie offered to add keyboards and the result of this January afternoon is what you hear above.

During recording, I learned that Esme once lived above the studio and was a dear friend of Louie and his family. I've been overwhelmed with how many people her light has touched. Even now Esme is inspiring our community and bringing people together. This song is simply an attempt to honor that inspiration and to give something back. Thank you, Esme, for all that you gave and thank you, Louie, for working with me on this song.

100% of all sales will go straight to Esme's family. Please give what you can through naming your own price for the song or by donating directly to forouresmeb.blogspot.com.

"The year she lived with us, Esme became part of my family. She has been a friend, my daughter's teacher and my musical touchstone ever since I've known her. We can't replace her. But she will always inspire us." ~ Louie Lino, January, 2012
lyrics
Lyrics

before you and I
change our minds
and let this go to waste
don't let it go
too fast
alas
I can't turn it back
to love and not neglect
all that we have
...falling through clouds
with the rain
and if you go
your shine will remain
and if you're lost
I will explain the way for you
hold on til you feel the rain stop
hold on til you hear the rain stop
all that you'd give
is all that you had
never gonna give
never gonna give up
on you
credits
released 12 January 2012
song written by Lauren Langner Larson / Ume