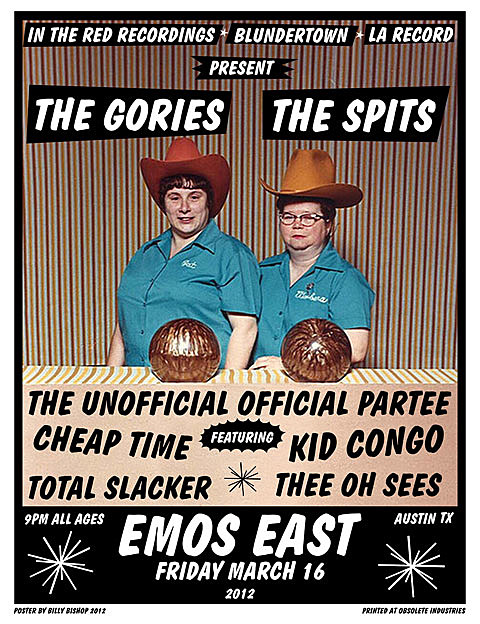 This garage rock show, previously announced without the full lineup, is the only show that the still-reunited Gories and garage punk powerhouse The Spits are playing during SXSW, though it's not part of SXSW so badges won't get you in, though RSVPing will.

LA Record is a co-presenter of this show, and OC Weekly asked LA Record head honcho Chris Ziegler why:

OC Weekly: Why did you partner with In The Red Records?

Chris Ziegler: In The Red is one of my favorite labels and I have dedicated a considerable part of my record-collecting life to working backwards to find and secure all the amazing records they put out when I was a little kid in Arizona and didn't know where records came from. Larry Hardy--who runs In The Red--has some kind of innate animal sense for rock & roll, and like six of my favorite 20 "contemporary" records are on In The Red: Wounded Lion, Andre Williams, Reigning Sound, Spits, Davila 666, Dirtbombs, Strange Boys, Clone Defects and Human Eye, Deadly Snakes ... Larry Hardy can pretty much fire when ready as far as I'm concerned.

It should definitely be a good one.

The Spits are currently on tour with TV Ghost. Check out pictures from the show they played at Cake Shop in NYC the other night.

Thee Oh Sees are also playing a bunch of other shows including the Carson Daly official showcase.