the award for scariest single thing at SXSW this year goes to...

THE DORITOS STAGE (photo by ceo_lex) 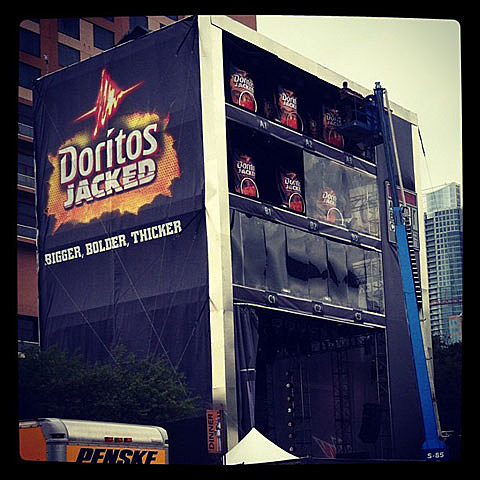 On the downside, though, came a sinking feeling that SXSW has gotten away from its origins of touting independent and unsung musicians.

Jay-Z got a jump on things with an American Express-sponsored concert the day before the music fest began, but while SXSW's equally hopping (and bigger-moneyed) multimedia conference was in high gear. His presence seemed to set the bad tone: More mainstream rappers than ever tried to cash in on the conference's corporate marketing side; more mainstream-rap-loving, high-fiving college spring breakers attended; and those extra days and extra hard-partiers meant more litter, filth and, yes, vomit on the streets by fest's end.

Lil Wayne, the newly paroled T.I., Nas and 50 Cent with special guest Eminem all crashed the party. The most shameless -- and quite literally the cheesiest -- display of corporate schilling by a rap star came from Snoop Dogg, who performed for the (Pepsi-owned) Doritos under a four-story faux vending machine stocked with the chipmaker's product.

Snoop Dog of course wasn't the only artist who performed on tha stage - it was busy all week (though I never personally made it over there, but did walk by it a lot). Video of Turquoise Jeep playing on it, below...