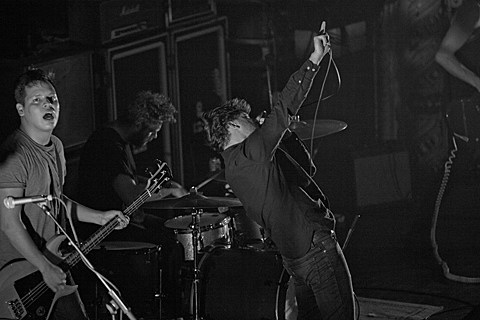 London, Ontario punks Single Mothers released their four-song self titled EP back in 2011 and it's one of those EPs that's just way too short, kills for the entire time, and leaves you begging for a full length album. Well fortunately, we'll be getting that album this year. The band have signed with XL imprint Hot Charity (Willis Earl Beal, Ratking) and the label will release their debut full length at some point in the near future. The album is being produced by Joby J. Ford of The Bronx, whose mix of post-hardcore and rock n' roll isn't too far removed from that of Single Mothers, and it wouldn't be surprising if they've picked up a few tips from The Bronx along the way.

The band are great live too, thrashing around ruthlessly as frontman Andrew Thomson spits wordy, personal lyrics at the crowd. They'll be taking that show on the road again this February and March, and will be coming through Austin for SXSW. The shows they have lined up so far include March 13 at Metal and Lace Lounge, a TBA show on 3/14, the CMW showcase on March 15 at Friends, and the Alternative Press showcase on March 16 at Red 7.

Before that, they'll be at pre-SXSW festival Savannah Stopover in Georgia, and afterwards they'll be at post-SXSW festival Spillover 2013 in Dallas with Parenthetical Girls, Parquet Courts, Today is the Day, Alex Bleeker and the Freaks, Widowspeak, Ducktails, and more. Tickets for Spillover are on sale now. The full lineup is below.

Single Mothers have other upcoming dates also, and all of them are listed below, along with a stream of their EP...