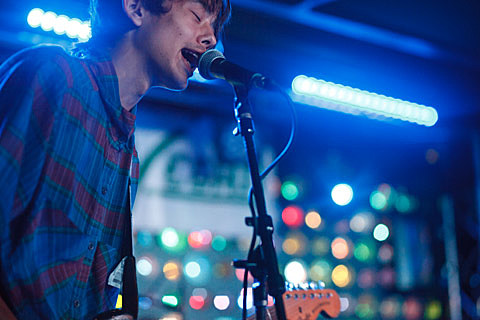 Austin's teenage rockers Residual Kid, who recently played our CMJ party and have J Mascis approval, are now getting a major label record contract before even getting their high school diplomas. As Billboard reports, the boys have signed to SIRE/Warner), who are planning to put out their next release in 2015. Seymor Stein personally chose them for the label...

In a statement, Stein remarks "Despite their young age and youthful appearance Residual Kid are not a boy band, but rather a young and exciting and highly talented rock band. This fact is borne out by their audience which was comprised mostly of 18 to 35 year olds, along with many older local veteran musicians in who have taken the band under their wing."

They've got a few shows coming up, including two in their hometown with killer lineups. The first is an all-punk FFF Nites show happening Friday (11/7) at Parish. They go on in between two ripping Canadian bands, Single Mothers (who also played BV CMJ this year) and METZ, and the show will be headlined by the reunited post-hardcore greats The Blood Brothers. Like all FFF Nites shows, it's free with a FFF wristband.

The next night we expect to see them in the audience at Dinosaur Jr.

Then, before the year ends, they'll open for underrated '90s band Toadies (whose festival in Fort Worth they played earlier this year) at Emo's on December 26. That bill also includes The Drakulas, and tickets are on sale now.

All dates are listed, with a live video, below...