Ramesh at Empire Automotive in 2012 (more by Tim Griffin) 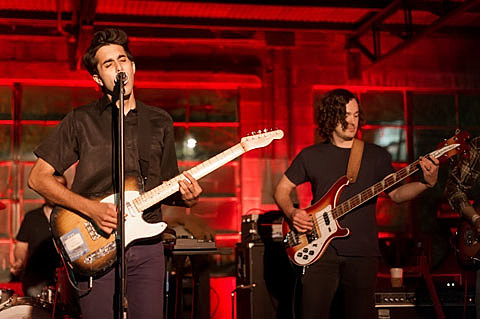 Austin's Ramesh, formerly of Voxtrot, is still prepping his debut solo album, which there's still little detail on, but he did just release two new songs, "Youth Trip" and "Paradise (For Keith Haring and the Legendary Children)," which you can listen to below.

This week, he'll kick off a short "Lost Weekend Tour" of his home state with fellow Austin artist Orthy that begins in Austin on Thursday (7/25) at Red 7, then hits Dallas on Friday (7/26) at Three Links, and finally Houston on Saturday (7/27) at Walter's with Young Girls. Advance tickets for the Dallas show are on sale now. Admission for the Austin show is $5 at the door, and admission for the Houston show is $8 at the door.

Song streams and tour flyer below...

Ramesh - "Paradise (For Keith Haring and the Legendary Children)"