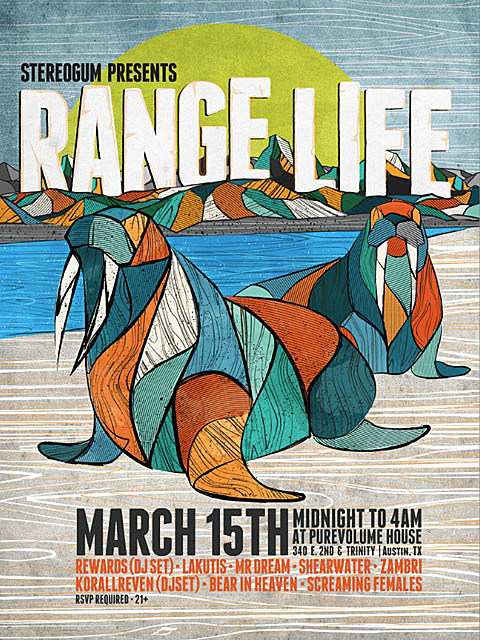 Around midnight on the evening of March 15th, until well after every other bar in town has stopped serving legally intoxicating beverages, the Stereogum crew is throwing an Austin-based party with a bunch of bands we believe in while charging absolutely no money for admission, or legally intoxicating beverages. It’s called RANGE LIFE, and it is for you. If you are 21+, and in Austin the evening of March 15th, and near the very conveniently located intersection of E. 2nd & Trinity.

The night opens with a DJ set from REWARDS (aka Aaron Pfenning, formerly of Chairlift) while you get to know the space, and then Das Racist crew affiliate/spirit animal LAKUTIS will rap, eventually turning over the stage to Brooklyn-based Albini acolytes Mr. Dream. After they bruise up the backline things will get more local, stately, and shirtless, with Jonathan Meiburg and Thor Harris’s Shearwater, whose set will wash into a Balearic-pop and R&B-minded DJ set from Swedish Acéphale duo Korallreven. Up next is Bear In Heaven, who just released a zoom-heavy Wonder Showzen-affiliated video for 2012 superjam “The Reflection Of You” and are about to put out an album called I Love You, It’s Cool, which is a great name for an album. Following that is a set from the young NJ firebrands Screaming Females, who are holding down the latter half of our bill’s Albini quotient with their Steve-produced Ugly LP. We will wrap up the night with the occasionally gothic electronic art-pop BTW Zambri. By this point the sun will be rising, and we’ll all be best friends.

This whole thing kicks off at 11:59PM on March 15th at The PureVolume House (340 E. 2nd St. & Trinity), in Austin, Texas and goes for over four hours. If you are 21+ you are cordially welcome, and invited to drink for free all night. All you have to do is RSVP HERE. Do it!

This is the sequential lineup, with links to many more posts on the artists: