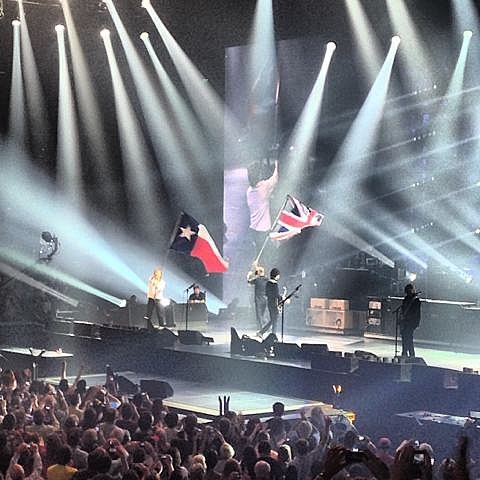 Paul McCartney's Out There tour is currently in Austin, having played the first of two consecutive nights at the Frank Erwin Center last night (5/22). Macca played nearly 40 songs culled from over 50 years of songs, including "Eight Days a Week," "Maybe I'm Amazed," "Blackbird," "Live and Let Die" and a show-ending Abbey Road trifecta of "Golden Slumbers"/"Carry That Weight"/"The End." Setlist is below. Paul plays Erwin Center again tonight (5/22) and you can look forward to pictures from that here on BV Austin.

In other news, McCartney has written a letter to Russian officials in support of incarcerated Pussy Riot member Maria Alyokhina who is currently on a hunger strike:

My personal belief is that further incarceration for Maria will be harmful for her and the situation as a whole, which, of course, is being watched by people all over the world. In the great tradition of fair-mindedness which the Russian people (many of whom are my friends) are famous for, I believe that you granting this request would send a very positive message to all the people who have followed this case.

Meanwhile, the classic 1976 live album, Wings Over America, is getting a deluxe reissue next week (5/28). The box set comes with the original album -- the first triple-album to ever go to #1 in the U.S. -- plus a disc of bonus audio, as well as a DVD featuring a rarely-seen television special, Wings Over the World. You can watch a video "unboxing" of the reissue, along with last night's Erwin Center setlist, below.