"Thanks to everyone who came out to the @OHSNAPBenefit. The blackout on 6th St. was a huge bummer. Working on rescheduling... :(" - Ume 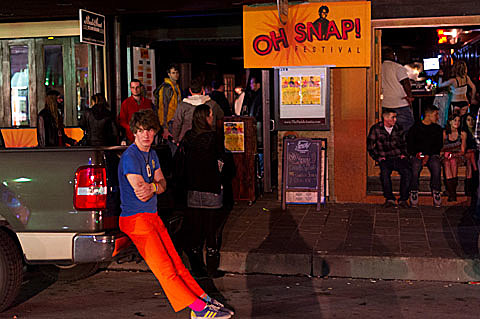 As the above tweet implies, Ume were one of the bands that didn't get a chance to play the Oh Snap! festival on Saturday night due to power outage. The band has since also written on Facebook:

Thanks, everyone! We are so bummed we didn't get to play, but the festival organizers and all the bands still made it an awesome weekend! And props to Shakey Graves for the battery powered performance! Yes, we will be at SXSW and then Stubb's Outside April 7th... details coming soon!

Though it doesn't say so on Stubb's website yet, we can confirm that Ume are opening for the Toadies that night at Stubb's, as are Boy + Kite. ($25 tickets are on sale).

Meanwhile Oh Snap! have scheduled a makeup show, or I should say "Blackout Party", at The Parish on February 10th. "We had several bands that couldn't play to close out our festival, so we are having another show!" and "Announcing Lineup Very Soon."

Ume don't begin touring with Cursive until February 12th, so maybe they'll be playing the blackout party too. Stay tuned for more info.