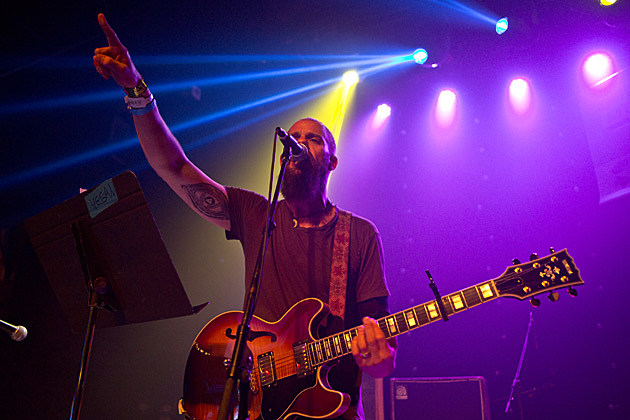 "The last night at SXSW, while everyone else was seeing Prince and Justin Timberlake, I went to the Invisible Oranges showcase, which was loaded with very loud acts -- KEN Mode, Full Of Hell, Pallbearer -- and one pretty quiet one: John Baizley of Baroness, playing (mostly) solo, doing some Townes Van Zandt covers, some Baroness songs stripped down, and talking about his recovery from the injuries he sustained when his band's tour bus crashed, injuring nine members of its crew. It was a life-affirming set, in which Baizley discussed (among other things) how his injuries have forced him to relearn how to play guitar. We often assume, I think, that when a musician survives an accident, he can simply continue making music, but the human body is a complicated machine, and the human brain even more so, and healing both, together, is hard enough even when that healing doesn't involve trying to reteach one's muscles, reflexes, and digits the demanding specifics of how to play an instrument at a professional level. So it shouldn't come as a huge surprise to hear that drummer Matt Maggioni and bassist Allen Blickle have parted ways with Baroness due to the injuries they suffered last summer, but it's still kind of heartbreaking."
[Michael Nelson, Stereogum]

And Baroness soldiers on... As discussed, Baroness will return to Austin for Chaos in Tejas this year, but it was more recently revealed that the Chaos show is part of a much larger North American tour that includes Lollapalooza and three Texas shows:

Tickets for the Mohawk show are still on sale. Dallas goes on sale April 5th. All tour dates can be found at IO.

P.S. Coliseum, who play a lot of upcoming dates with Baroness just dropped a new track. Check it out below...