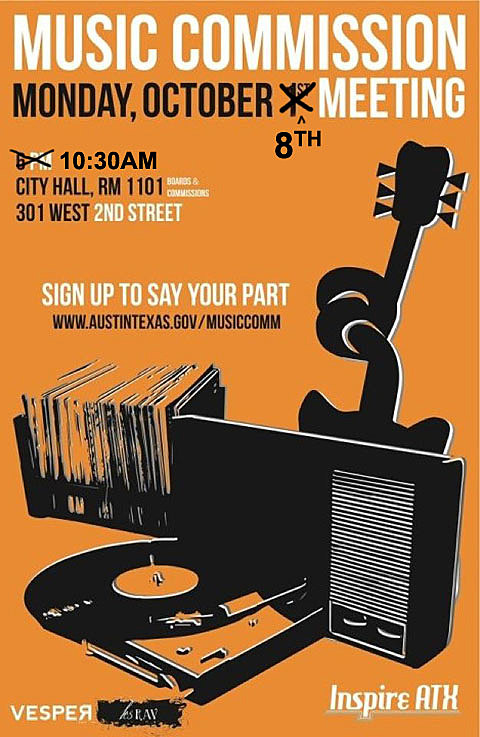 Originally scheduled for October 1, there will be a special meeting of the Austin Music Commission today (10/8) at 10:30am (City Hall, Rm 1101, Boards & Commissions, 301 West 2nd Street) to discuss several items in relation to the current noise ordinance and its impact on the 'Live Music Capital of The World', as well as other music-related issues.

As we mentioned in a previous post, venues like Cheer Up Charlies are currently facing challenges in trying to be both a viable venue for musicians as well as supportive member of the local community. It's not an easy balance, but it is encouraging to know that the dialogue is taking place. Music is Austin's culture, and anything that could impact that needs thoughtful consideration.

Inspire ATX is helping to lead the charge, and would no doubt welcome support at this meeting and in the future.

More information, including today's official agenda from the Austin Music Commission, below. 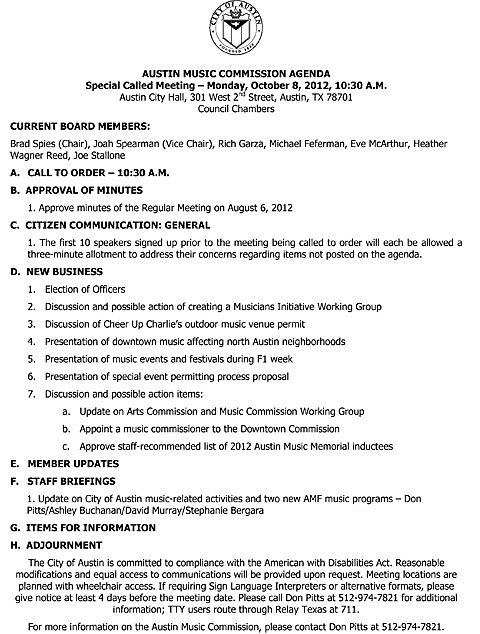 Inspire ATX: Connecting .Educating. Enabling. Improving https://twitter.com/InspireATX Email: InspireATX@gmail.com
Description
The Austin community was created by artists of all kinds; musicians, painters, writers, graphics, and above all idealists. We created this community by seeking, collaborating, and continually inspiring. We have all played a part in making Austin one of the most unique and vibrant cities in the world.

Austin has become a place for beginners to start, hard workers to play, and artists to express themselves. But this could change. For example, well-established music venues in growing neighborhoods are closing, moving, and/or truncating their hours. We believe that small businesses and artists should be expanding--not shrinking--in the nation's fastest growing city. It's time for you to take a stand, to really reach out and express your ideas and opinions. To help find solutions so that we can continue to grow, and to create.

Send us a message or email with questions, concerns, ideas or ways to get involved!

Quotes from the community:

"What the council doesn't seem to understand is that the music industry in Austin comprises not just the careers of thousands, but an integral part of our culture. We the people are being forced to defend a culture we have cultivated over the past decades from our own local government. Indeed, it is time the make the choice to stand up and unite !! - Dylan Weiss