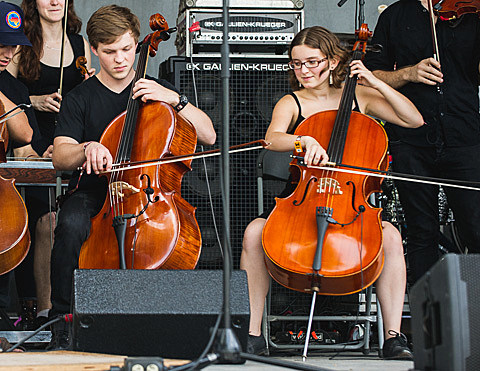 "The young group, comprised of a rotating ensemble of 15 to 20 musicians, boasts three cellos, six violins, horns a plenty, several pianos, a bassoon and a glockenspiel"

Austin's own chamber pop collective Mother Falcon are known to do a live Radiohead cover (see video below), and now you can get a copy of that for yourself thanks to a just-announced upcoming release. The press release says:

The buzz that sets in at the beginning of Radiohead's "Airbag" - in the original version a serrating guitar riff, amplified by Mother Falcon's string section - comes on like a swarm of ferocious bees. If you've had the pleasure to see this Austin's indie rock ensemble's live rendition, know exactly what that means and what vigorous, hauntingly complex story is about to unfold. The band's uniquely intense interpretations of Radiohead has become a legendary part of experiencing Mother Falcon live. So it is with great pleasure that the band prepares to release their live adaptation of OK Computer for the world to enjoy.

That's out March 18th which is right after the group plays at least 5 SXSW shows including one as part of a BrooklynVegan Austin-curated portion of the Flatstock stage inside the convention center's SXSW poster art show on Saturday, March 15. The full show, which goes from 4-6 pm includes gothy synth crew S U R V I V E, poppier electronic duo Bronze Whale, and Mother Falcon. Click those artist links to add their sets at the Flatstock stage to your SXSW schedule. Browse all Flatstock stage lineups here.

All Mother Falcon tour dates are listed along with a video of them performing Radiohead live, below..