Future of the Left @ Hotel Vegan (more by Tim Griffin) 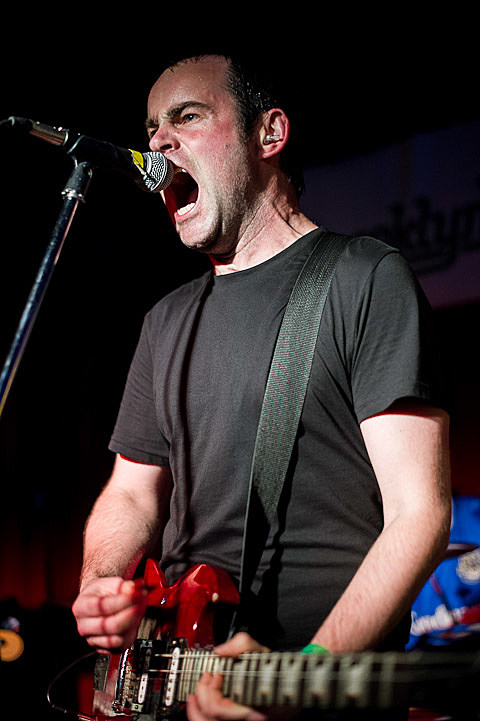 After King Tuff (read more about it at BrooklynVegan), my other top act of SXSW 2012 has to be Mikal Cronin. The Bay-area rocker played with a four-piece band, with Ty Segall on lead guitar at both of the two shows I saw: Friday night at Beerland and Saturday afternoon at Trailer Space Records (where Bill also caught the set). The tunes off his great self-titled record sounded poppy and sweet with the right amount of pissed-off swagger, and Ty shredding on guitar definitely helped.

Videos and more below....

I spent most of Wednesday at the BV day party, which included entertaining sets from Bleached, Deafheaven and a dubby, sun-baked three-piece Sun Araw, but no one impressed me as much as Future of the Left. I've never really liked the band's recordings, but their live set made a lot more sense to me: all jerky rhythms and hooky, circular choruses. With one song left, the club tried to keep things on time and end the show, but the crowd chanted long enough to earn another (they seemed seriously irate). As a reward, the band delivered the best songs of the set, a pair of raucous mclusky covers.

Regardless of what you think about the Magnetic Fields'Love at the Bottom of the Sea (a grower in my opinion), you'll want to see the band when their tour comes around. At the Parish on Thursday afternoon, the band spun a set of old and new tunes, all played to acoustic accompaniment. Merritt and collaborator Claudia Gonson were on point with their rapport and the new songs sounded great with the chamber arrangements.

Later that night I saw Sharon Van Etten, who called up J. Mascis to end her set with a cover of Soft Boys' "I Want to Destroy You"

Friday I had the pleasure of seeing the shoegazy The Twilight Sad turn up the volume at the "Hotel Vegan" indoor stage. The-Dream charmed the Fader Fort, headlined by Black Hippy and Kendrick Lamar (interviewed by Nardwuar below). Both sounded great and got the crowd involved, middle fingers in the air (see the end of "A.D.H.D." below).

The Dream, "Walking On The Moon" Live at the FADER FORT

The hip-hop continued on Saturday at Brooklyn Vegan's indoor stage. Philly producer/MC Lushlife opened up the day with laid back songs constructed on his laptop (you can't get any chillier than Erik Satie). He ended his set by covering Jay-Z's "Dead Presidents," constructing the beat from the ground up with his midi keyboard and laptop. If you're in Brooklyn, ee him at Glasslands on April 18th. 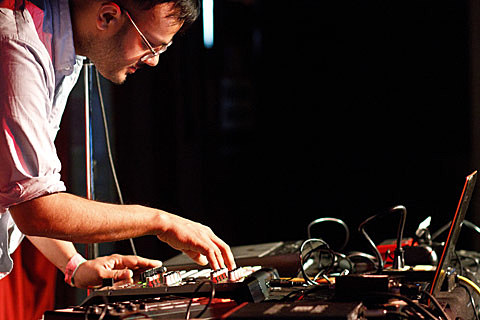 Later that day I caught G-Side, Cloud Nothings and redent Merge signee Bob Mould at Mohawk. Mould and trio played Sugar's Copper Blue straight-through and, even though I knew nothing about the record, it sounded amazing. Bob slashes at the guitar like someone a third of his age, and the tunes were bold and immediately relatable live.

Before King Tuff came out Saturday night, beer-soaked sets by Natural Child and Bare Wires warmed up the audience in the adjoining smaller ballroom (about a quarter of the size). Both those group put on great glammy stage shows. If you're in NYC, check out Natural Child when they open for Hunx on April 6th.