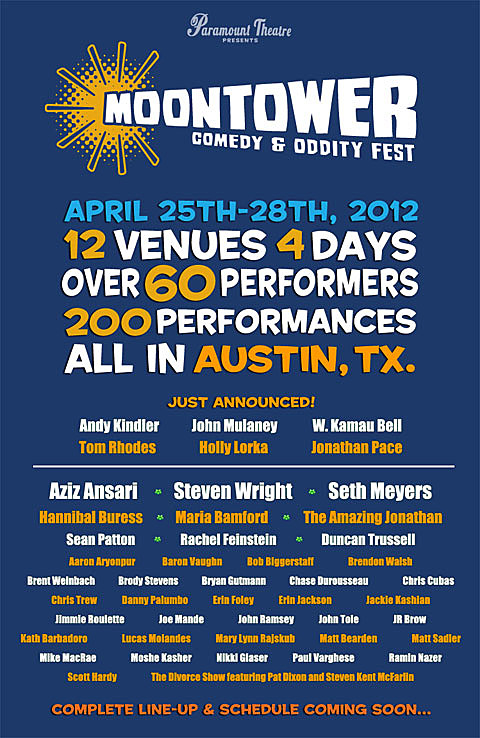 Though there's enough comedy at SXSW this year to keep us satisfied for a little while, in just about two months, the first Moontower Comedy & Oddity Fest will be held in Austin. The festival, scheduled for April 25- 28, is "four nights of stand-up, improv, sketch, and musical comedy throughout the city" includes performances by Aziz Ansari, Steven Wright, Seth Myers, Hannibal Buress and many more (all listed below).

Moontower Comedy and Oddity Festival presented by the Paramount Theatre brings to Austin, TX some of the funniest, wittiest and oddest world-class comics from around the globe. This marathon of side-splitting nights throughout the city is slated to bring over 60 comedians doing everything from stand-up and sketch to improv and musical comedy. National headliners, up-and-comer and local Austin-based comedians ensure that there are options for every type of comedy fan; die-hards to those just looking for a fun night.

Moontower will be held across the city at some of our favorite venues including:

When asked "Why Moontower?" the festival presenters at the Paramount Theatre said:

"Because Austin is a little blue oasis in a very red state. Because we live in a college town that knows when to skip class. Because we have a guitar, but never got around to taking lessons. Because comics and their fans are people of night. Because we will cast a beacon of light on the genre of comedy. We're an anomaly. And we can take a joke like no other city. But more importantly we know funny and we know festivals. We know how to throw a party the world wants to attend. We know how to ignite locals and how to be a destination. So get your ticket. Grab a seat. Silence your damn phone. And remember to tip your bartender."

Four-day passes to the festival, as well as VIP passes are on sale now. Single performance tickets will be available for purchase TODAY (2/23). For instance, Aziz Ansari tickets (early and late) are on sale at 10am.

More badge & VIP ticket info and the full lineup below...