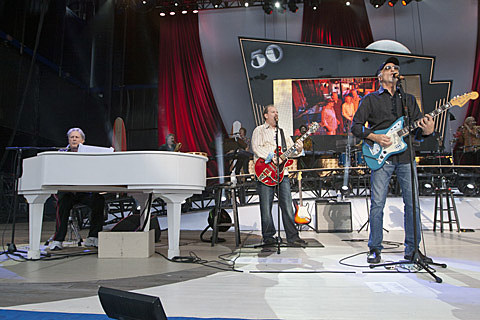 As you know, Brian Wilson (who recently turned 70) is back with the Beach Boys who are currently touring in reunited form across the world, but Rolling Stone reports that Mike Love is already looking past this and booking shows that don't include Brian...

Love and Johnston have one show booked so far, in South America in October, as first reported by Peru's El Comercio.

Another Beach Boys date was announced for October 6th at Winnie, Texas's Nutty Jerry's, but last night the venue announced the date was canceled. "The group that was scheduled to perform at Nutty Jerry's is not the same lineup as the current 'Beach Boys 50th Anniversary" tour,' the venue said in a statement. "As a result Nutty Jerry's did not feel that we could advertise the show as the 'original' Beach Boys. Nutty Jerry's regrets the misunderstanding and any inconvenience to our loyal customers."

The Beach Boys play PNC Bank Arts Center in Holmdel, NJ tonight (6/27) and have international dates scheduled with Brian through 9/28 in London.