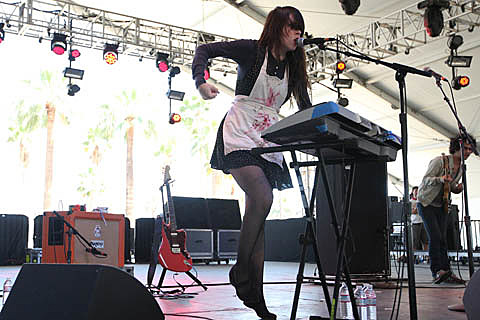 Recently formed supergroup Antemasque -- whose first few songs featured Omar Rodriguez-Lopez and Cedric Bixler-Zavala of At the Drive In/Mars Volta, along with Mars Volta Drummer Dave Elitch and massively productive Red Hot Chili Peppers/Atoms For Peace bass monster Flea - -have announced an upcoming tour of the Southwest and West Coast in August. It is unclear what exactly the touring lineup will be beyond Rodriguez-Lopez and Bixler-Zavala, but it looks like it won't include Flea.

Antemasque will be joined by Mexican garage-rockers Le Butcherettes who also feature Rodriguez-Lopez on bass and as a producer. Butcherettes singer Teri Gender-Bender has also provided vocals for Rodriguez-Lopez's other group, Bosnian Rainbows and the group has toured with The Mars Volta, so its safe to say that these two like to play music together. For Le Butcherettes this is another impressive notch on their hard rock belt, having already toured with Deftones, Queens of the Stone Age and other luminaries.

The bands will kick off the tour with five Texas dates. They'll hit San Antonio on August 2 at the White Rabbit (tickets), Austin on August 3 at the Mohawk (tickets), Houston on August 4 at Fitzgerald's (tickets), Dallas on August 5 at Trees (tickets), and El Paso on August 7 at Tricky Falls (tickets). Tickets at each of the above links go on sale Friday June 27 at 10 AM for their respective time zones (El Paso is Mountain Time).

All tour dates are listed, along with Antemasque streams, below...