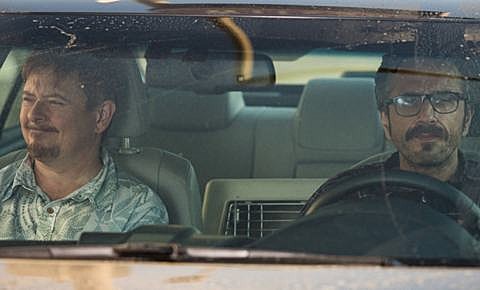 As mentioned on BV, comedian and podcast host Marc Maron is set to make the leap to TV with his new IFC series, Maron, which debuts on May 3. Before that happens, Maron will be in Austin for Moontower Comedy & Oddity Fest (April 24 - 27), appearing at four different events.

Firstly, he'll be doing standup as part of his "Out of the Garage" tour on 4/25 at Stateside at the Paramount. Then he'll be part of a discussion called "Four Eyes" with bespectacled comedians Andy Kindler, The Lucas Brothers, and Dom "Father Guido Sarducci" Irera on 4/25 at The Parish. Then there's an advance screening of 'Maron' the same day (4/25) at Stateside at the Paramount.

And finally, Maron will be doing a live taping of his WTF podcast on 4/26 at Stateside at the Paramount with guests Bill Burr, Jim Norton, Dom Irrera, Janeane Garofalo, Michael Ian Black, Maria Bamford, Todd Barry and more. All these events require a Moontower fest badge to get in (which are still available).

Check out a couple 30-second previews of Maron below.