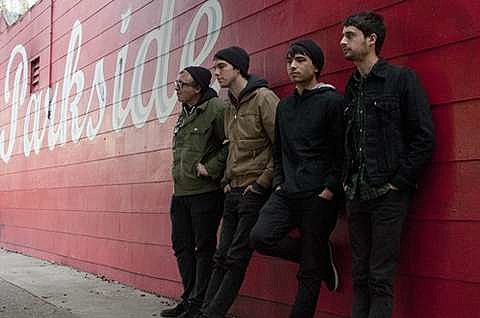 LA rockers Joyce Manor are about to kick off a short southwest tour which comes to TX for four shows surrounding Chaos in Tejas. Those shows include Rubber Gloves in Denton (5/30) and the previously discussed Chaos in Tejas show at Beauty Ballroom on June 1 with No Age, Ceremony, The Young and Gun Outfit (tickets). Screaming Females were supposed to play that show too but unfortunately had to cancel. They'll follow that with another Chaos in Tejas show at Scoot Inn on June 2 with Touche Amore, Japanther, Creem, Post Teens, and Hounds of Hate. Tickets for that show are on sale now. That show is the first on a three-date run with Touche Amore, which also includes a Lubbock, TX show at Jake's on June 5.

The band released their second LP and first for Asian Man Records, Of All Things I Will Soon Grow Tired, last month. When I first wrote about that album, I mentioned it's combined approach to both emo and indie rock. I'd also like to mention that it begs for repeated listens and despite consisting of 9 songs in only 13 minutes, each track has got a hell of a lot of individuality. In addition to their trademark pop punk blasts, we're given two raw acoustic tracks, the slow-ish jam, "See How Tame I Can Be," the punky jangle pop of "Bride of Usher," and a fun, but slightly out of place cover of "Video Killed the Radio Star." If you still haven't heard the album, stream the whole thing over at Punknews.