Japandroids at Mohawk in 2011 (more by TIm Griffin) 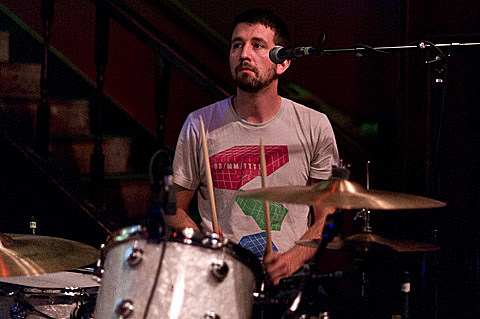 Noise pop duo Japandroids are set to release the followup to their 2009 debut, Post Nothing, this June on Polyvinyl. The album is called Celebration Rock and includes the 2010 single "Younger Us" (download above or stream below) and a cover of The Gun Club's "For the Love of Ivy," off of their great 1981 debut, Fire of Love. Guitarist/vocalist Brian King talked to Pitchfork about the new album and some of his favorite songwriters:

I'm a huge fan of people who are considered more professional songwriters, like Nick Cave, but I've tried not to hold myself to a standard like that. You have to work within your own limitations. But someone like Paul Westerberg is able to deliver these emotional, heartfelt scenarios while making punk-influenced rock songs at the same time. That's always been a really powerful influence on me, just because it seems more like something that I could do. Everyone loves Dylan and the Beatles, but most people know they're not just going to become that. And while you can't wake up every day thinking, "We're going to be like the Replacements" either, what they do is more like something to reach for; they seem like they come from the same place that you came from, and maybe they didn't know what they were doing anymore than you did.

Japandroids will be at SXSW next week where they will play the main stage of at "Hotel Vegan" at Hotel Vegas on Wednesday (3/14). The rest of that stage's lineup is coming shortly. The other two stages on that day are HERE.

All of their dates and the new song stream below...