Henry Rollins in NYC in 2011 (more by Tamara Porras) 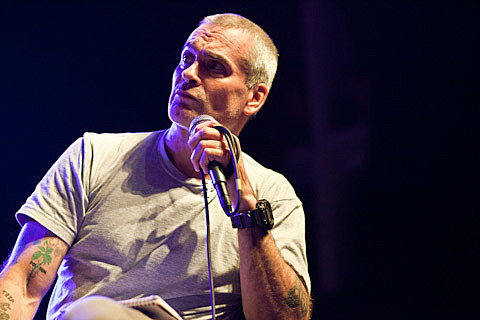 Henry Rollins will be going on a spoken word tour later this year, which he's dubbed the "Capitalism Tour." The tour will kick off in early September, hitting the capitals of all 50 states, and ending in Washington, DC on November 5, the day before the Presidential election (11/6). That tour brings him to Texas's capital, Austin, for a show on September 23 at Scottish Rite Theater. Tickets for that show are on sale now. All dates are listed below.

Rollins recently spoke to TheIndependent.ca about his views on capitalism:

So what are you looking toward in terms of identifying root causes of the inequality that's in the world, and the reason why?

Oh, I think that's easy to nail down. I think it's deregulated capitalism. I think it's a crass and gross disregard for natural resources, and for making a more sustainable planet. Instead of going for solar panels people still have this idea that we have to keep drilling into the ground for resources. A long time ago (big) companies started very quietly taking over major water reserves, and they are in fact able to play God -- because he who has the water rules the day. Without water, it doesn't matter how blonde your hair is or how blue your eyes are, you're going to die.

And so I think there's been a very strong and quiet push to acquire water rights. A book called 'The End of Food' was very instructive to me, where I learned about Nestle, maybe one of the biggest food providers in the world, and how they control a lot of water. So I think capitalism--I have 10 'x' but 20 would be better. Now I have 50 'x', now I need 1,000 'x'. But when you live on one 'x' a century how come you need all the rest? Because I want it. And that kind of mindset -- it doesn't always lead to things that are good for people. And so there's gonna be winners and losers in this century, and there will be far fewer winners and far more losers with the present paradigm.

I mean, if people are satisfied with how this is going--if this is OK for them--this is the result you're going to get. And you can call that whatever you want. You can say, 'What, you're a socialist?' Well, I don't know, I like capitalism quite a bit actually, because it rewards me for thinking outside of the box. It rewards me for working hard, which is what I like to do. But when it has no rules and when the corporations can dictate the politics, there's no level playing field and there's gonna be, like I said, a few winners and a whole lotta losers. And a lot of the losers are global, you know. Africa -- the continent will probably be the number one loser.

All dates of the "Capitalism Tour" are listed below...