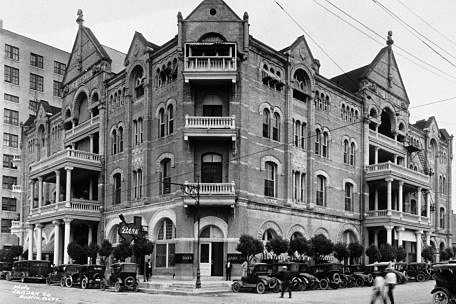 Now's your chance to own some prime, historical real estate (which is also a SXSW venue)...

The Driskill Hotel in downtown Austin is for sale, another sign that local commercial real estate owners are in the mood to cash in on the city's rising national cachet.

The historic hotel -- arguably the most popular in Austin due to its character and home on East Sixth Street -- has been owned by Lowe Enterprises since 2005 and is operated by a subsidiary of that company, Destination Hotels & Resorts.

"Yes, it's on the market," said Kevin Mallory, senior managing director of CBRE Hotels based in Chicago. [BizJournals]

Did you know Concrete Blonde's "Ghost of a Texas Ladies Man" was inspired by an experience lead singer Johnette Napolitan had at the Driskill? As Spinner points out, "When the singer imagined she saw a face checking her out in the shower of her room at the Driskill, she was inspired to write a song about it. She tried to turn out the light, but "he wouldn't let me get near it/He seemed so glad to see a woman in the flesh/And I really liked his spirit."" Watch the video for the song, which reached number 2 on the Modern Rock chart in 1992, below...