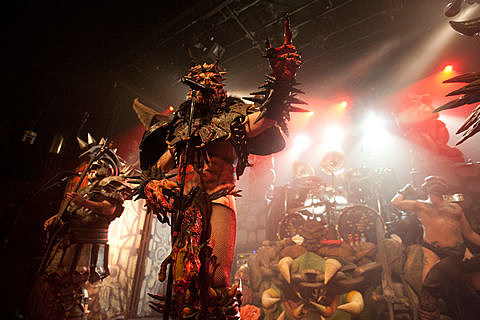 Said verbose front-thing Oderus Urungus, "Our loyal slaves have been laboring ceaselessly to create the ultimate GWAR show, and for this they have received nothing but abuse and torment. I know our legions of loyal fans will be delighted to experience a whole new cast of ridiculous characters, all of whom shall meet exceedingly messy ends to the soundtrack of slaughter that our new album shall provide. Get ready world...GWAR is coming!"[GWAR]

In anticipation of their September 17 release for their 13th studio album, Battle Maximus, heavy metal overlords GWAR are descending upon North America for the first leg of their "Madness at the Core of Time" world tour with Whitechapel, Iron Reagan, and Band of Orcs. That tour includes a show in Houston on October 24 at Warehouse Live and a show in Austin on October 26 at Emo's for Housecore Horror Film Fest. Wristbands for the festival are one sale now. Tickets for Houston go on sale Friday (8/2) at 12 PM.

All dates listed, along with the tour poster and a video from the upcoming album, below...

GWAR - "Madness at the Core of Time" (Official)