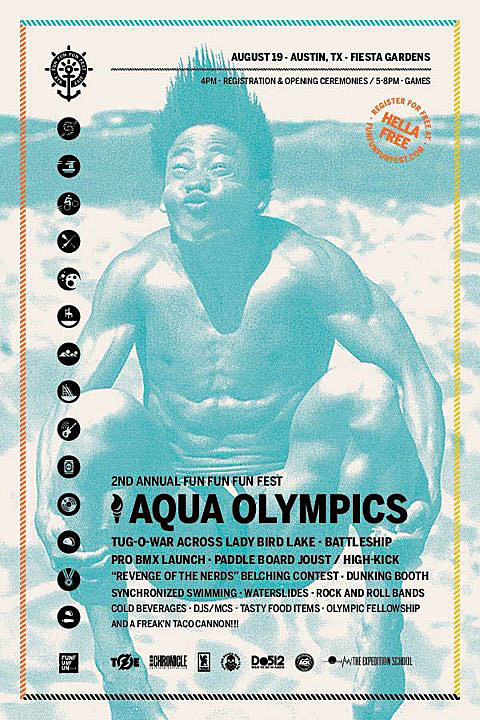 More info, in their own words (aka the press release), below...

Fun Fun Fun Fest is excited to announce the second annual Aqua Olympics taking place at Fiesta Gardens in Austin, TX on Sunday, August 19, beginning with Opening Ceremonies and registration at 4pm. Participants will have a chance to win prizes, including passes to the festival, by competing in events ranging from Stand Up Paddle Jousting to a "Revenge of the Nerds" Belching Contest. The festivities will also include live music, food and complimentary refreshments.

Competitors and teams for all events are encouraged to quickly register at funfunfunfest.com/2012_water_olympics. The festivities will also include pro riders soaring into the drink on the BMX Lagoon Launch and pro skaters ripping it up on the half pipe. You can also take part in giant slip n' slide racing and other games. And, don't forget about the FFF Taco Cannon, which will be on hand dispensing supreme taco deliciousness by the blast.

"There was never any doubt whether we were going to bring back the Aqua Olympics for a second year," says Transmission Events Marketing Director Matt Mandrella. "Even though 2011 was a testing year, everyone had such a blast on the water and in the stands that we even decided to step it up this year with the water sports and entertainment experience."

KGSR's Andy Langer and 101X's Trevin on the Radio will be providing the play-by-play during the competitions, while Riverboat Gamblers frontman Mike Wiebe reports live from the sidelines. No Fun Fun Fun Fest event would be complete without live music and delicious snacks. This year, Austin's Learning Secrets DJs and FFF Fest 2012 group Orthy will perform at the Aqua Olympics, and Frank will provide delicious treats for sale on site. Complimentary refreshments will be provided.

This year, Fun Fun Fun Fest gives a respectful nod to one of the city's other beloved festivals, Aqua Fest, which took place on the shores of Lady Bird Lake in decades past. And with the Summer Olympics heating up in London at the moment, participants should not be short on inspiration or competitive fervor.

Weekend 3-day passes and PIP (Pretty Important People) passes are now on sale. Single day passes, artist lineup by day and time, student discounts and more will be coming this month. Stay tuned for chances to win tickets in the member's area at funfunfunfest.com, during Fun Fun Fun Fest's annual Scavenger Hunts across Texas, and on Twitter and Facebook. The schedule for FFFest Nites will be announced later this summer ­ all afterparties are free with a festival wristband.