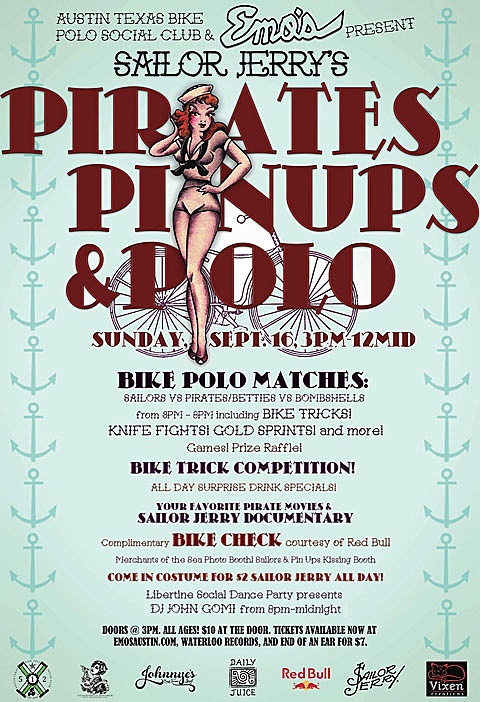 Sailor Jerry is coming to Emo's East on Sunday 9/16 to present PIRATES, PIN-UPS, AND POLO! The venue will be converted into an indoor arena featuring Bike Polo with The Austin Texas Bike Polo Social Club, Pirate Movies, a kissing booth, and... erm... KNIFE FIGHTS?! All to be followed by a dance party with DJ John Gomi (of Libertine Social Club).

Oh yeah - the wearing of sailor/pirate costumes is encouraged, and will nab the wearer $2 Sailor Jerry's all day long. Full details for the event are below.

All Ages. $2 SAILOR JERRY'S FOR THOSE IN COSTUME.
Surprise Drink Specials all day and night.

HOW: Tickets on sale now for $7 or at the door for $10
Tickets can be purchased at
http://www.emosaustin.com/, Waterloo Records, & End of an Ear

AUSTIN - On Sunday, September 16th, starting at 3:00 PM Emo's Concert Venue & Events Center (2015 E. Riverside), will transform into an indoor arena featuring the as they host bike polo matches (Sailors vs Pirates/Betties vs Bombshells) from 3PM - 8PM. This event is being sponsored by Sailor Jerry's, as well as other sponsorship from local businesses and vendors.Ticket prices include sporting event, bike trick competition, knife fights, gold sprints, your favorite pirate movies and Sailor Jerry documentary, kissing booth, photo booth, complimentary bike check courtesy of Red Bull. For additional cost one can buy raffle tickets to win some fantastic prizes from local sponsors. DJ John Gomi (of Libertine Social Club) will get the dance party started following the events of the day at 8PM - Midnight. Anyone dressed in appropriate costume following the sailors, pirates, & pinups theme will receive $2 Sailor Jerry's all day long. Additional drink specials will be announced throughout the day featuring a selection of different spirits.

Doors open at 3:00 PM. All ages are welcome. Dressing up is highly encouraged!