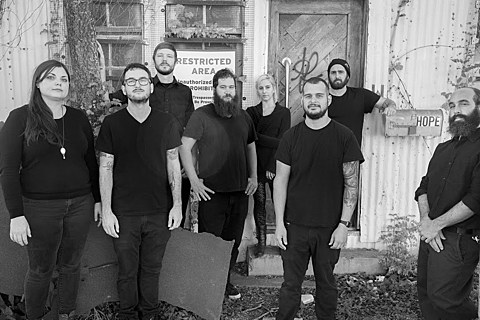 Austin's East Cameron Folkcore make rollicking orchestral folk rock, and they've got a bit of punk edge too, which is fitting since Gorilla Biscuits drummer Luke Abbey recently joined as a member. Earlier this week, they put out their new album, Kingdom of Fear, on Nine Mile Records, and they're currently in the process of making a video trilogy for its tracks "Kingdom of Fear," "The Joke" and "969." We've got the premiere of part 2 ("The Joke"), which you can watch below.

The band wrapped up a four-night stand at Austin's Salvage Vanguard Theater last week to celebrate the release of the LP, and they have two more hometown shows coming up. They play the 65th annual Art City Austin happening this month (4/25-26), and then they have a club show at Holy Mountain on May 16.