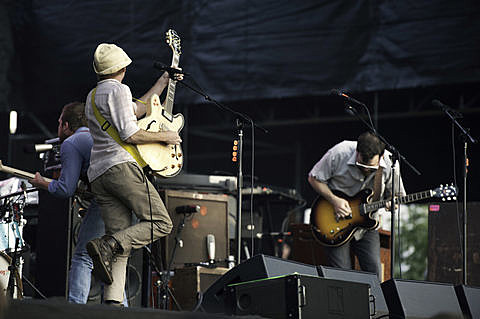 Like they did in November of 2010, Dr. Dog will play Stubb's on March 9, 2012, part of a two month tour that begins in early February. The band's new album Be The Void, is out via ANTI on 2/7. Tickets for the Austin show are on sale now.

Givers, who played their own 600+ capacity headlining show in Brooklyn this past week (while they were in NYC to play with Preservation Hall Jazz Band), open for Dr. Dog in Austin, and in Houston (Fitzgerald's), and in Dallas (Granada Theatre). All Givers dates are listed below.

Within the past month, Dr. Dog have released several trailers - clips of songs recorded live in the studio, teasing fans and making it just that much harder to wait for the new LP. The most recent featured "These Days". The band says it shows what kind of album they're going to make, "loud and raucous, but also melodic." Other trailers are "Big Girl" and "Heavy Light", and you can watch all three, along with a full song stream of new song "That Old Black Hole" and the Givers dates, below...

--
Be The Void trailer - These Days

"These Days was the first song tracked. The guitars, bass and drums were all recorded live. I think it set the stage for what kind of album Dr. Dog was going to make; loud and raucous, but also melodic. This was shot through the glass from the control room."

Be The Void trailer - Big Girl

"Scott laying down some guitar for Big Girl, lit by the mirror ball. Most of the actual recording was done late at night, after a long day of talking about ideas and experimenting with sounds."

Be The Void trailer - Heavy Light

"Even the electronic drums were tracked live. Slick nailed most of the "real" drums on the record in 1 or 2 takes. I made the camera dolly used here with materials from Home Depot and a skate shop, with a big assist from our friend Brian McTear at Miner Street Recordings."