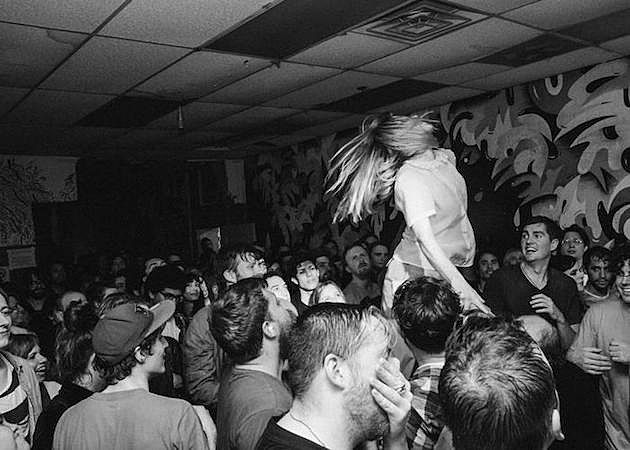 Basically from the moment Williamsburg DIY venue Death by Audio announced that they were closing, DbA's Matt Conboy began filming. With cinematographer Jonathan Yi, editor Andrew Ratzlaff, producer Amanda Schultz, and a large camera crew, they shot shows, behind the scenes stuff, interviews with staff and friends, everything, right to the end. (BV contributor Ebru Yildiz did the still photography.) The result is new documentary Goodnight Brooklyn: The Story of Death By Audio which will make its world premiere at the 2016 SXSW Film Festival. It's one of ten films selected (from over 1000 entrants) in this year's Documentary Feature Competition. Here's the official synopsis:

From 2005 to 2014 Death By Audio served as a venue for underground music, art and a non-traditional living environment. Founders: Oliver Ackermann, Edan Wilber and Matt Conboy, endure the challenges of hosting hundreds of people a night with looming threats of building department or police raids. Under ironic circumstances, we follow them through the last days as they navigate a billion dollar company moving into their building and the associated threats and intimidation to keep residents in fear of reprisals.

UPDATE: The film's SXSW premiere will happen Monday, March 14 at 4 PM at the Stateside Theatre. There's an afterparty happening at Cheer Up Charlies (where the BrooklynVegan SXSW parties will happen later in the week) with DBA's Edan and Mark DJing, plus live sets from Spray Paint and Daniel Francis Doyle.

Other SXSW screenings: Tuesday, March 15 (2 PM) at Rollins Theatre at the Long Center; and again at Stateside Theatre on Friday, March 18 at 10 PM.

The NYC premiere of Goodnight Brooklyn happens during the NYC Independent Film Fest later this spring.