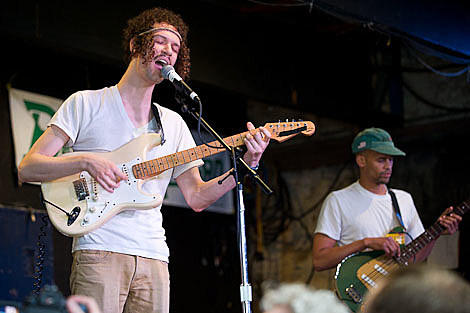 "Writing is always a slow process for me; I seem to not be able to write more than one song a month. I'm already working on [my third album] though. After the summer I'm just going to be writing and enjoying my life. It's a really weird life to be given. I'm still figuring out how to make it. It sometimes seems easier to follow along with a 9-5 life and do your creativity in your downtime. I find that I'm only doing writing I feel good about when I'm supposed to be doing something else. It's a strange brew that I'm still trying to figure out, but writing is always my number one goal when I'm not on tour." [Darwin Deez]

Ex-Creaky Boards member Darwin Deez has been touring in support of his second album Songs for Imaginative People. Recently, he announced some more North American dates for the fall, including a show in Austin on November 20 at Holy Mountain and one in Dallas on November 21 at Club Dada. Tickets are available at Holy Mountain's site and Club Dada's site.

All tour dates at BrooklynVegan. Stream his new LP below...