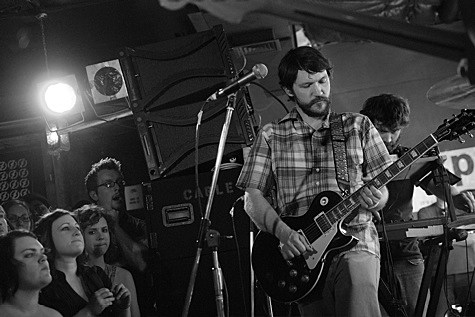 Cursive are releasing their seventh LP, I Am Gemini on February 21 via Saddle Creek and touring in support of it through April. That tour hits Austin on April 14 at Mohawk with support from Cymbals Eat Guitars and Conduits. Tickets for that show are on sale now. The tour also includes dates in February and March with Austin's Ume. Although they won't be at the Mohawk show, hopefully we'll get a hometown show from them either before or after the Cursive tour. Did anyone catch them (Ume) at Emo's East with the Black Angels on New Year's Eve?

When we first announced the Cursive tour, they had just released the album's first single, "The Sun and Moon," which you can stream HERE. A second cut from the album, "The Cat and Mouse," has since been revealed and can be streamed below.

And speaking of emo-leaning indie bands playing Mohawk, The Jealous Sound will play the Austin venue on February 6 as part of their tour in support of A Gentle Reminder, their first full length album of original material since their 2003 debut. Tickets are on sale now.

All Cursive dates and Jealous Sound dates at BrooklynVegan. Cursive song stream below...