CHVRCHES at Mohawk earlier this month (more by Tim Griffin) 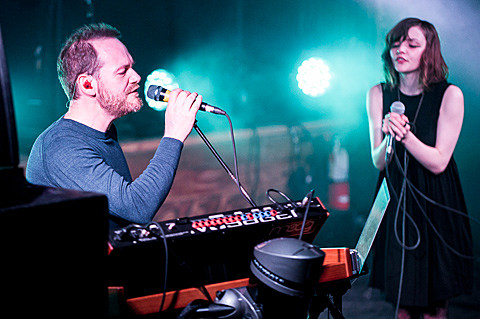 CHVRCHES came to Austin this year for SXSW in March and a show at Mohawk earlier this month, and they already have plans to come back. The Scottish electropop trio has announced an extensive world tour to support the release of their debut full length, The Bones of What You Believe, which is due to drop September 24 via Glassnote Records. They'll kick off the tour with some dates in Australia, Japan, and Europe and will make their way to Texas this fall. The tour hits Austin first on November 22 at Stubbs Waller Creek Amphitheater, then Dallas on November 23 at South Side Ballroom, then Houston on November 24 at House of Blues.

Check out the full tour schedule and more at BrooklynVegan. Some videos, including their US TV debut on Late Night with Jimmy Fallon below...