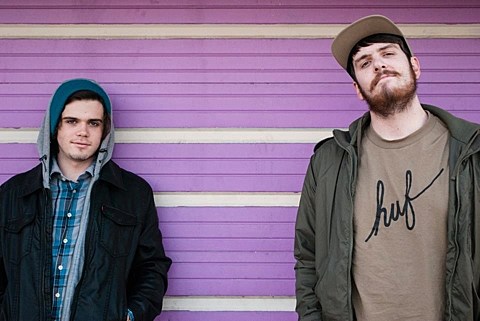 The time off between the end of new 2012 music and the beginning of 2013's musical onslaught is a great time to check out things you may have missed throughout the year, and one local group that just caught our ear is Austin production duo Bames (aka Bryan Boutwell and James Welch). They got love from Gaslamp Killer, who wrote, "I can't get enough of [their song, "Sippin"]. Super evil bass music, smooth & powerful in a moody fashion," and Daedelus shouted them out too in his short list of "every young beat producer avoiding the "Real Trap Shit" trap," which also included Clicks & Whistles, LDFD, Morri$, Comma, Sinjin Hawke, NastyNasty, Snorlax, and Raf Riley. You can stream "Sippin" and a newer cut, "Bronson," at the bottom of this post.

It was also just revealed that Bames will release their debut EP via Fool's Gold this February, so stay tuned for that, and congrats guys! They don't have any live appearances coming up that we can find, but maybe you caught them opening for Baauer at Red 7, for Ital Tek at Kingdom or for Justice at Austin Music Hall in 2012?