The first of the three free BrooklynVegan SXSW day parties at Cheer Up Charlies in Austin went down yesterday (3/17). 15 bands took over the venue's indoor and outdoor stages from noon to 6 pm, with a punk show outside and a more eclectic bill inside.

Outside kicked off with a bang with nasally garage punks White Reaper tearing things up at the early hour of noon. Then it was another garagey band, the Epitaph-signed Plague Vendor, who are about to release a new album next week. Their first album was tightly-wound downstrummed punk but they're loosening things up this time around for something more like early White Stripes. We got stuff off both albums in yesterday's set, and singer Brandon Blaine was as wild and theatrical on stage as ever. Then it was Mean Jeans (whose first EP for Fat Wreck Chords is out today), who offered an updated take on the Ramones. There's no lack of bands who have done that, but Mean Jeans really know how to tap into that band's melodic strengths, not just the power chords. Plus they looked like they were having a blast, and the crowd watching them did too. Up a similar alley was Radioactivity who followed. Like Mean Jeans, they're equal parts driving punk and sugary melodies, but Radiaoctivity tap more into late '70s power pop than the '60s pop the Ramones were channelling. They're always a great live band, and yesterday's show was no exception.

It changed up a bit for Turnover, who are really more of a dream pop band but with an emo tinge (dreamo?) that made them fit perfectly with the other bands. They played almost all of last year's very good Peripheral Vision, worked in one of their new songs, and sounded great doing so. For set closer "Cutting My Fingers Off," a huge chunk of the crowd was singing along. Turnover were followed directly by their tourmates and labelmates Citizen, who brought a much heavier sound. Last year's Everybody Is Going to Heaven had them reaching back to '90s post-hardcore bands like The Jesus Lizard and giving it a fresh update for the modern punk scene. And finally to end the day, it got even heavier when local Texas favorites Power Trip put on one of their characteristically insane shows. They had a huge mosh pit going, cups and cans flying, and endless stage divers. We mostly got stuff off their 2013 debut LP, but they also played a new song off the upcoming Nightmare Logic.

On the inside stage, the day began with Your Friend, the Kansas dream pop band who recently put their debut album out on Domino. Then it was Australia's Julia Jacklin, who only has a few songs out, but had a very well put-together set. She was backed by a three-piece band and had a sound that wasn't unlike Angel Olsen, intimate folk music with a rock edge. After Julia it was Canadian singer Daniel Romano, who's had a country vibe from the start but has been pulling from many more genres recently. His nearly-unclassifiable set further proved this. Another hard-to-classify artist followed, Little Scream, whose set had hints of rock, R&B, and more. Then it was Ezra Furman, who was decked out in a bright red dress, dancing on stage, and really getting the crowd into it. Ezra was followed by the glittery punk duo PWR BTTM, who also got the crowd going in a huge way with their hilarious stage banter and undeniable songs. Then the show briefly went back to a folky vibe for Australia's Spookyland, whose eccentric singer makes them tough to ignore. And the show ended with the craziest indoor set of the day, Sorority Noise. They had a crowd packed in up front who were jumping around, raising fists, and yelling every word.

Thanks to Altamont for sponsoring this day and for the limited t-shirts and totes they made just for the party:

If you RSVP'd, stay tuned to find out if you won the Gretsch guitar. Winner will be announced after SXSW.

We return to the same venue today (900 Red River, right next to Mohawk) from noon-6, and do it again Saturday too. Check out the full lineups and make sure to RSVP for the free shows. 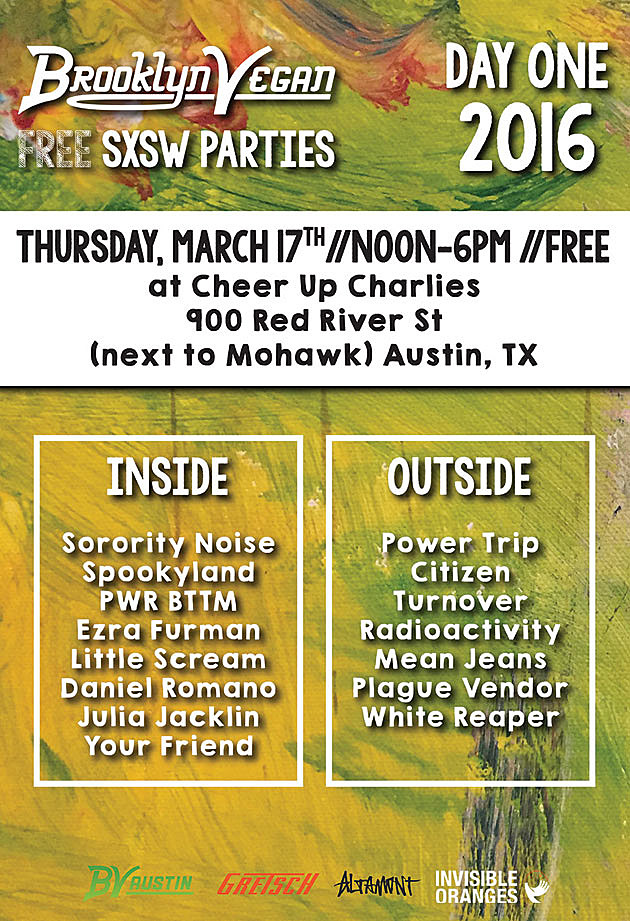