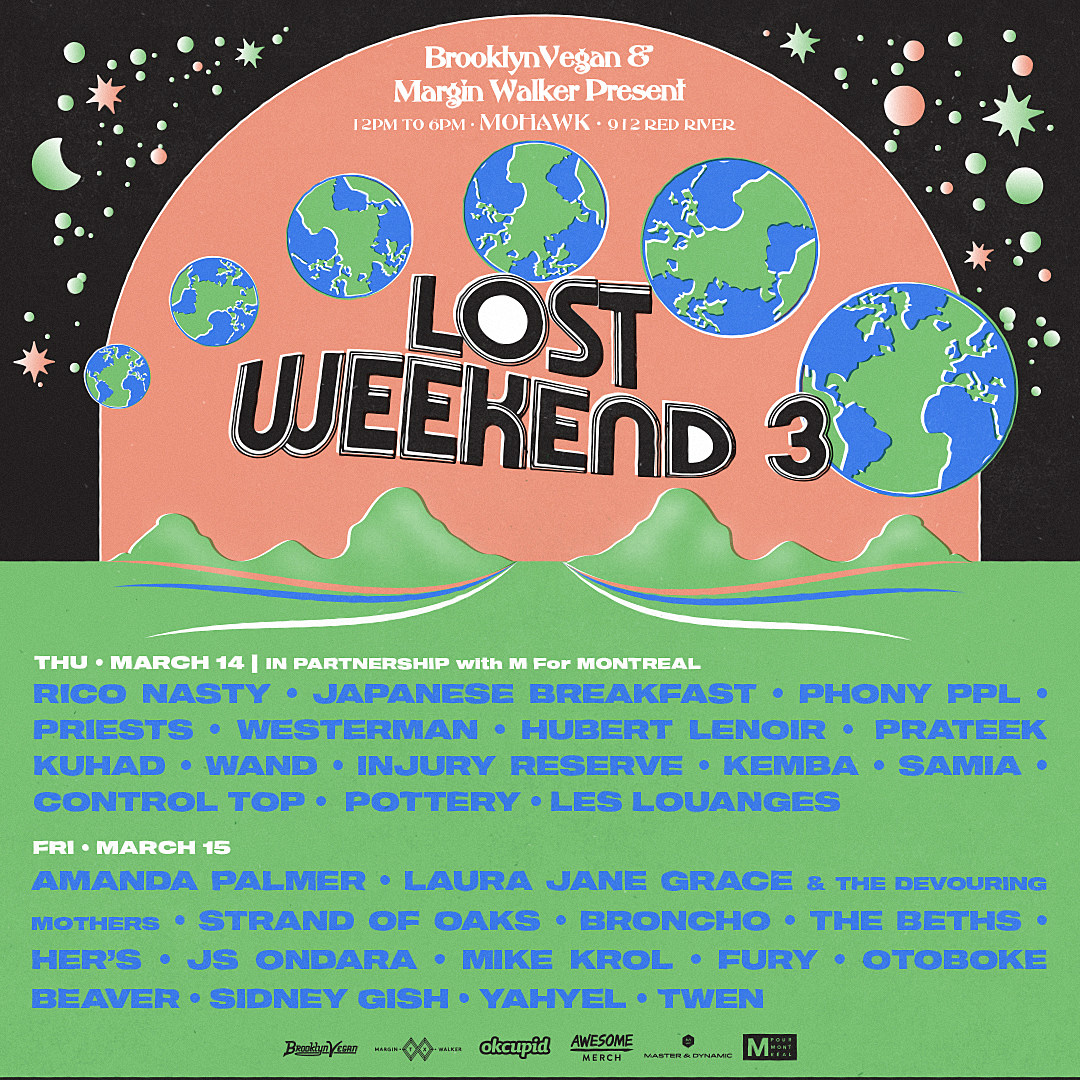 As mentioned, BrooklynVegan and Margin Walker's SXSW day parties, LOST WEEKEND, are returning for the third year, and this year the parties are moving to Austin venue Mohawk (at 10th & Red River, right next door to Cheer Up Charlies where we were for many years in a row). We're now excited to announce the full lineup of 27 artists playing across two days and two stages (and sets will be streaming live in VR thanks to Oculus, and on SXSW's Facebook page).

The FREE day parties at Mohawk happen Thursday, March 14 and Friday March 15 from noon to 6 PM both days. RSVP now so we know you're coming, and for a chance TO WIN a pair of Master & Dynamic MW50+ 2-In-1 Wireless On-Ear + Over-Ear Headphones (a $399 value!), AND for a chance to win exclusive Lost Weekend merch items courtesy of our merch partner AWESOME MERCH.

Make sure you're a member of OkCupid because they'll be inside -- for the second year in a row -- giving out free drinks to members with the app installed.

More details on all bands below. Meanwhile RSVP, and here's the set times:

At the Thursday (3/14) show, M For Montreal will be joining us, as they always do. Here's a breakdown of the THURSDAY LINEUP:

RICO NASTY: Rico Nasty makes profoundly modern rap that shares a spirit (and sometimes a sound) with punk, and that can be very melodic too. She released one of our favorite albums of 2018 and has come into 2019 swinging with a handful of new singles and high-profile guest appearances that proves she's just getting better and better.

JAPANESE BREAKFAST: Japanese Breakfast have been one of our favorite indie/dream pop bands for a while, especially after releasing Soft Sounds From Another Planet, which was one of our favorite albums of 2017. Her live show keeps improving, and we're excited to have her back at one of our day parties.

PHONY PPL: Phony Ppl describe themselves as having "no genre," and though a lot of bands might like to be classified that way, Phony Ppl truly deserve it. Their great 2018 album mozaik touches on jazz, hip hop, soul, funk, rock, psychedelia, and more, and it's a gorgeous record. They're masters of the stage too. Having recently toured opening for Pusha T, the NYC band are now in the midst of a hometown residency at Blue Note Jazz Club and we're thrilled that they're taking a break from that to fly down to Austin for SXSW.

PRIESTS: Priests have been one of the fiercest punk bands around for a few years now -- with a live show that's always energetic -- and they're going in a slightly poppier direction for their new album The Seduction of Kansas which comes out in April.

WESTERMAN: With a spare, understated sound that is both poppy, soulful and modern, UK singer-songwriter Westerman has drawn comparisons to everyone from Nick Drake, Arthur Russell, and Talking Heads. (Comparisons to Jose Gonzalez and Hot Chip would not be off base either.) After releasing a handful of promising singles and EPs, he's now gearing up for his debut album which we hope to hear more about soon.

HUBERT LENOIR: Quebec City's Hubert Lenoir debuted last year with Darlène, a glammy "post-modern opera" (his words) that was shortlisted for the Polaris Music Prize, and he's already got a reputation as a live artist too. When we caught him at M For Montreal last year, we wrote: "The whole crowd at La Sala Rossa was bouncing up and down, screaming, and singing along so loudly at points they drowned out Hubert himself. Singing in French, I should say, as Hubert didn't utter a word of English during his set -- not even a 'thank you' -- apart from 'motherfucker,' which he interjected often. He was a dynamo dressed as a late-'90s skate-rat, coming off like a glammed-up gene-spliced Bowie/Prince/Adam Ant hybrid."

PRATEEK KUHAD: Prateek Kuhad is coming to SXSW all the way from India (where he was born, and now lives again after studying at NYU), and it's a real treat that he'll be back on our shores. His calming indie folk has gained comparisons to Fleet Foxes and The Tallest Man On Earth, and once you hear his soaring voice, you're hooked.

WAND: Wand came up as a garage-psych band who caught the attention of Ty Segall early on, but their music is in much different territory now. They're gearing up to release their anticipated new album Laughing Matter, and early singles have been much more in the Radiohead-style art rock direction that they've been heading towards for a bit now.

INJURY RESERVE: Avant-hip hop group Injury Reserve became the second hip hop act to sign to indie rock-oriented label Loma Vista following Denzel Curry (the label is also home to St. Vincent, Manchester Orchestra, and more), and they're fresh off releasing their great new single "Jawbreaker" which features the above-mentioned Rico Nasty. We can't wait to see what else they have in store this year.

KEMBA: Bronx rapper Kemba (fka YC the Cynic) has been on the rise for a few years now, and his upcoming album is looking very promising. Most details are still TBA, but it's expected to feature recent singles "Exhale" (ft. Smino) and the even better "Deadass," which kinda sounds like Kendrick Lamar meets classic New York rap.

SAMIA: Samia only has a few singles out, but she's already been co-signed by Father John Misty and is quickly becoming one of the most promising new indie rock artists in NYC. Her latest and so far best single is "Lasting Friend," a fuzzed-out indie rocker that tells a coming-of-age story while battling sexism. Fans of the boygenius crew, take note.

CONTROL TOP: Control Top's debut album Covert Contracts comes out in April via Get Better Records, and there's deservedly been a ton of buzz for it based on the first couple singles, which find the balance between classic punk and classic post-punk. They're driving, catchy, and full of raw aggression. After SXSW, they'll hit the road opening for Laura Jane Grace of Against Me! (who plays our Friday party).

POTTERY: Montreal band Pottery mix post-punk, psych, krautrock, nervy mutant pop, and more, and they recently signed to Partisan who will release their debut EP No. 1 in May, and they'll be touring with Viagra Boys after SXSW. Fans of Parquet Courts (who they've also toured with) or '80s groups like XTC and Orange Juice should dig their manic, jangly sound.

LES LOUANGES: Montreal's Les Louanges sing in French, but you don't need to understand the language to be won over by their silky jams, which fall somewhere between Washed Out and Rhye.

Here's a breakdown of the FRIDAY LINEUP:

AMANDA PALMER: From her time in the Dresden Dolls to her time as a long-running solo artist, Amanda Palmer has always been a breathtaking performer and a true original, and she's coming into SXSW fresh off releasing her great, highly ambitious new solo album There Will Be No Intermission.

LAURA JANE GRACE AND THE DEVOURING MOTHERS: After years of fronting the powerful punk band Against Me!, who have been in the midst of a massive resurgence since releasing their great 2014 album Transgender Dysphoria Blues, Laura Jane Grace has gone solo for the first time with last year's Bought To Rot. She made it with backing band The Devouring Mothers (which includes Against Me! drummer Atom Willard and bassist Marc Hudson, who has engineered, co-produced, and contributed to Against Me! records in the past), and it's got some folkier songs that scream "solo debut" but also lots of punkier songs that aren't too far removed from Against Me!. It's great and we're looking forward to seeing Laura bring these new songs to life.

STRAND OF OAKS: Strand of Oaks (aka Tim Showalter) started out as a bare-bones folk singer, but he has transformed his project into a massive-sounding rock band that can recall anything from The Replacements' heartland punk to My Morning Jacket's psychedelic indie rock. Tim actually made his upcoming album Eraserland with 4/5 of My Morning Jacket backing him, and Jason Isbell makes an appearance on the record too. If you're still on the Strand of Oaks train but you like Isbell and MMJ, this would be a good time to hop on board.

BRONCHO: Oklahoma's Broncho stated out making punky indie rock, but they evolved into a clean, punchy pop band (but still in a punk way) on last year's Bad Behavior, which was stacked with super catchy jams. As fun as that record can be, their energy comes across even more on stage.

THE BETHS: New Zealand band The Beths' debut album Future Me Hates Me (Carpark Records) was one of 2018's most instantly enjoyable debuts and also one of our favorite albums of 2018. It's packed to the brim with crunchy, '90s-style power pop indie rock, the kind of thing that could appeal to fans of anything from Weezer to Juliana Hatfield.

HER'S: UK duo Her's (not to be confused with H.E.R.) released their debut album An Invitation to Her's last year which sounds kinda like The Strokes if they listened to jazzy, jangly ’80s alt rock and pop and not Television and Tom Petty.

J.S. ONDARA: J.S. Ondara was born in Nairobi, Kenya but he fell in love with American folk music, particularly that of Bob Dylan, and he moved to Dylan’s home state of Minnesota of 2013 to chase his very own American Dream. Just last month, he put out his debut album Tales of America, and as soon as you hear his gorgeous, soaring vocals, you'll see why he's been rising so quickly.

MIKE KROL: The Merge-signed Mike Krol named his new album Power Chords, and that's a pretty great title for these driving, no-frills rock songs that beg to be heard live.

FURY: Speaking of aptly-named things, it doesn't get much more apt than this Orange County hardcore crew naming themselves Fury. They've built a reputation over the last few years as a killer live band (and we agree they are), and now they've signed to Run For Cover (Camp Cope, Turnover, Modern Baseball, etc) for their new album Failed Entertainment. Going by lead single "Angels Over Berlin," Fury are adding just a bit more melody into their sound without sacrificing their pure aggression.

OTOBOKE BEAVER: Coming to SXSW all the way from Japan are Otoboke Beaver, whose anticipated new album ITEKOMA HITS pulls from raging hardcore punk, bouncy indie pop, scrappy garage rock, and more. It’s nearly impossible to pin down, and it’s fun as hell to listen to. We haven't seen them yet, but they seem like the kind of band who are gonna put on a very memorable show.

SIDNEY GISH: Ever since quietly dropping her sophomore album No Dogs Allowed into the world on New Year's Eve 2018, Boston indie rocker (and killer guitarist) Sidney Gish has been quickly rising in the world. She deservedly picked up lots of buzz, and has gone on to tour with Camp Cope, Mitski, and more.

YAHYEL: Otoboke Beaver aren't the only band on our Friday party who will be in town from Japan. Yayhel hail from Tokyo and they're riding high off the strength of last year's Human, an album of crackling atmospheric pop that has gained comparisons to The xx and James Blake.

TWEN: Nahville's TWEN built a reputation as a killer live band before they even released any studio recordings, but a little birdie tells us they've finally got an album on the way and we think it's gonna be pretty damn good.

Once again, both shows are TOTALLY FREE. RSVP is open.

We also have an official nighttime SXSW showcase on Saturday 3/16 at Scoot Inn with Trail of Dead, Charly Bliss, Ringo Deathstarr and more.