Off! at the Vans Warehouse in Brooklyn (more by BBG) 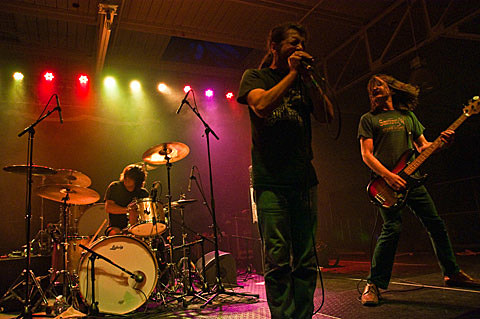 Those looking to avoid the crowds but not the fun during SXSW can hold on until March 18th to head to Dallas for Bro Fest 2012 at Club DaDa. The show (which begins at noon on that Sunday), still currently in the works, will feature at least twenty bands in total, of which sixteen have already been announced. Tickets are on sale now for the incredible lineup that is Cerebral Ballzy, The Entrance Band, The Men, Sleepy Sun, Titus Andronicus, White Mystery, All Pigs Must Die, Coliseum, Narrows, And So I Watched You From Afar, The Coathangers, Crystal Antlers, Crocodiles, The Growlers, Prince Rama, and Off! with more still TBA.

Filed Under: All Pigs Must Die, And So I Watch You From Afar, And So I Watched You From Afar, Bro Fest, Cerebral Ballzy, Coliseum, Crocodiles, Crystal Antlers, Dallas, Entrance, Narrows, OFF!, Prince Rama, Sleepy Sun, The Coathangers, The Entrance Band, The Growlers, The Men, Titus Andronicus, White Mystery
Categories: metal, Music, tour dates
Comments
Leave A Comment
Back To Top
RIP Austin venue Barracuda
RIP Austin venue Barracuda
SXSW 2020 cancelled due to coronavirus
SXSW still on despite large companies dropping out