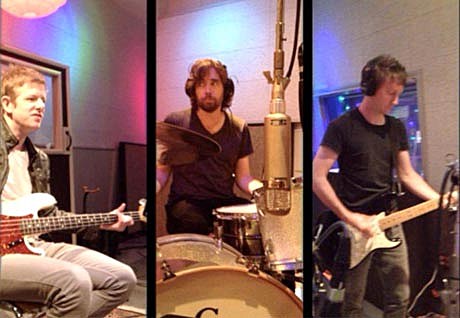 Britt Daniel of Spoon who recently formed the "supergroup" Divine Fits, now has yet another new band. Britt explains in an interview with an Exclaim:

"I'm going to be recording with this band -- I'm going to be playing bass with Jason Narducy, who's played with Telekinesis and Verbow, and then Jon Wurster [of Superchunk/Mountain Goats] is going to be on drums," Daniel explains. "We're going to be making a record and we're going to have to be there every morning at 11 a.m. We're calling it Split the Evil at this point, but I don't know if that's what [Narducy's] going to end up calling the project."

A Consequence of Sound interview with Jason Narducy, clarifies that Spl:t S:ngle is the name of his new solo project and, "Britt (bass) and Jon (drums) were kind enough to record 13 songs with [him] last month." That's a picture of the band above.

The interview with Exclaim also mentions that Britt Daniel has another Spoon album in the works.