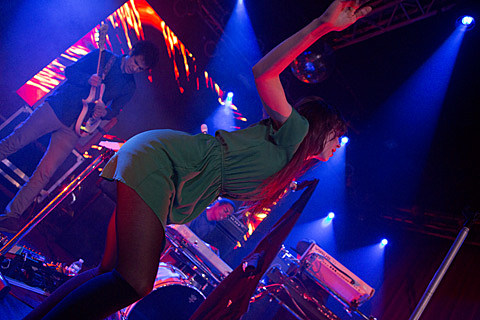 "At the Drive-In - which also includes singer Cedric Bixler-Zavala, guitarist Jim Ward, bassist Paul Hinojos and drummer Tony Hajjar - have scattered to other projects, leaving the future unknown. The Mars Volta, the post-ATDI post-punk/prog act led by Rodriguez-Lopez and Bixler-Zavala, is officially broken up, too, but the guitarist is already deep into Bosnian Rainbows, his band with singer Teri Gender Bender of Le Butcherettes. Next week, Bosnian Rainbows begin a European tour with the Yeah Yeah Yeahs (plus a few dates in Texas and California) and release a self-titled debut album on June 25th." [Rolling Stone]

As RS points out, Bosnian Rainbows' tour is on its way to Texas: