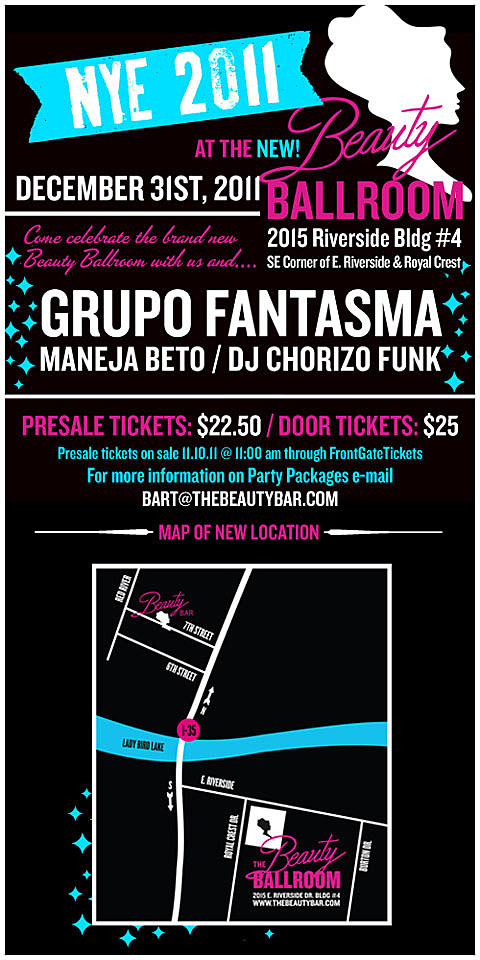 The press release says it all (well, most of it):

After 5 years at its current location on 7th St and Red River, The Beauty Bar brand is expanding to a second location, a 700-capacity venue located at 2015 Riverside, on the SE corner of Royal Crest and Riverside.

Beauty Bar founder Paul Devitt and Frank Hendrix from Emo's are joining forces to bring this exciting new venue to Austin. "Frank approached me this summer about his plans to lease a boarded up nightclub near the new Emo's. A month later he asked me if I'd be interested in partnering up" said Devitt. "We became friends when I opened on 7th Street and Frank has always liked the brand."

The Beauty Ballroom will feature state of the art light and sound, a 500-cap dance floor and 200-cap balcony. This second, new Beauty Bar location promises to be one of Austin's premier live music venues with a focus on booking more national and international touring acts while still offering the lounge feel and Beauty Bar aesthetic that patrons around the country have fallen in love with.

"We are really excited about the new venue on Riverside. From the layout of the building to the live production specs to the signature paint job and decor, we are really putting a lot of thought into this venture and we hope to bring Austin something a little different from the standard music venue experience." - Beauty Bar partner Bart Butler.

December 31, 2011, The Beauty Ballroom makes its grand debut with a special New Years Eve performance from longtime Beauty Bar compatriots and Grammy Award winning artists Grupo Fantasma, along with Maneja Beto and DJ Chorizo Funk. In addition, the show will be filmed and recorded for inclusion in the bands upcoming live CD/DVD release. For more information visit http://thebeautybar.com/austin

Grupo Fantasma tickets are on sale.

What the press release doesn't mention is that Beauty Bar's current location on Red River is, if the rumors are to be believed, closing after SXSW this year. Emo's closes its Red River location even sooner. Emo's Inside will host its last show on 12/30 of this year.

Emo's East, or "the new Emo's" as they call it above, is having a New Year's Eve party with The Black Angels, Wooden Shjips and Ume. Tickets are on sale.