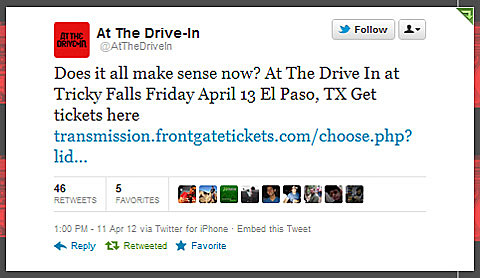 As suspected, the points marked on the image of Texas are now all accounted for, as At The Drive-In announced their hometown El Paso show happening at Tricky Falls on Friday, April 13th.. Hopefully you were paying attention to the BVAustin twitter (or the band's or some other twitter) when the show was announced at 1PM, because if so, you might have a ticket to the gig which is now sold out.

The new El Paso show happens one day after the Marfa show. Both remaining TX shows happen before Coachella.

ATDI played Dallas last night, and Austin the night before that.