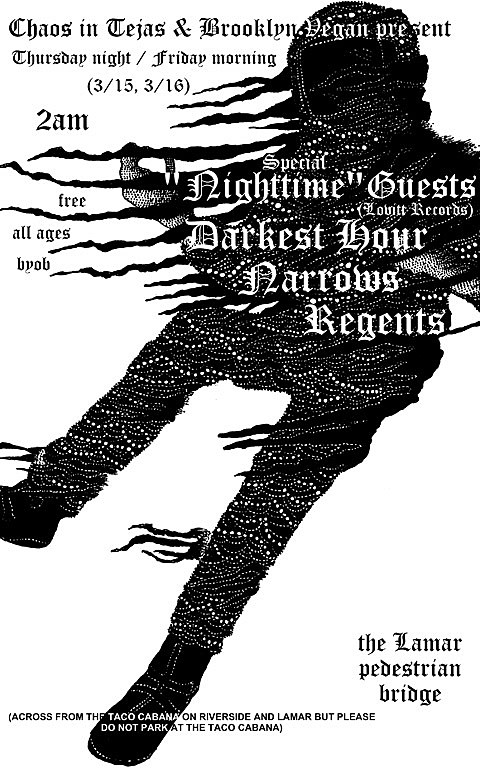 I've teased about it for a few days now, but now here are MOST of the details of the late-night 'bridge show' I put together with Chaos in Tejas.

Starting at 2AM on the Lamar Pedestrian Bridge on Thursday night (3/15), you can catch a special "Nighttime" guest along with Darkest Hour, Narrows, and Regents! The show is totally and completely FREE, open to all ages AND you can BYOB if you like (at your own risk, of course)! A big thank you to the amazing Sophie Penrose for the jawdropping flyer, and stay tuned to BV Austin and @bvBBG for the final band to be announced on Thursday afternoon (3/15). DON'T SLEEP! This will rule.

The show is one of two Chaos in Tejas events this week in Austin, with the first one, an official SXSW showcase, happening on two stages Wednesday night at Hotel Vegas & the Volstead Lounge with (get this) Juvenile, Mannie Fresh, Katey Red, Pallbearer (who play the BV-BBG show at Lovejoys), The Impalers, Razika (who play Hotel Vegan on Wed), DJ Rusty Lazer and many, many more. Flyer for that show is below.

Wednesday during the DAY at Hotel Vegas and Volstead Lounge is our first day of Hotel Vegan, BBG stage included.

Wednesday night is also the BrooklynVegan official showcase at Bar 96. 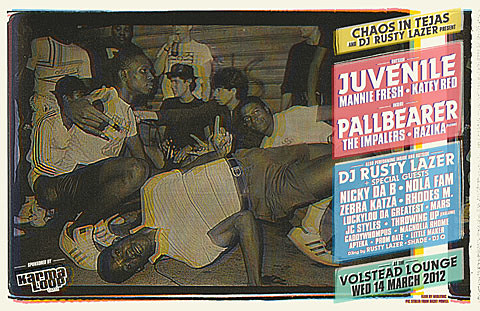