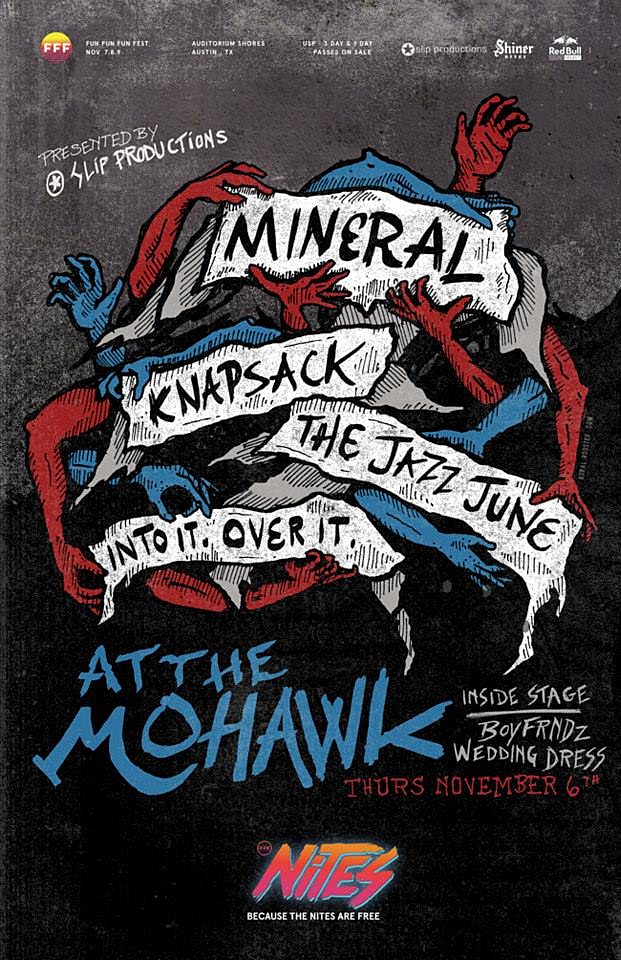 Anyone attending Austin's Fun Fun Fun Fest this weekend knows the festival spans multiple genres. Anyone from a metalhead to a hip hop head can find plenty to enjoy. If you'll be one of the emo kids (or emo adults) at the fest this weekend, this guide is for you:

The number one, absolutely unmissable show for emo fans this week is the Slip Productions FFF Nites show going down TONIGHT (11/6) at Mohawk (outdoor) with three bands who helped pioneer the genre back in the '90s -- Mineral (reunited as of this year), Knapsack (reunited as of last year) and The Jazz June (reunited as of last year and now with a great new album to boot) -- and one who kept it alive while those bands were broken up -- Into It. Over It., the project of Evan Weiss who's been in The Progress, Stay Ahead of the Weather, Their/There/They're and too many other bands to list. Meanwhile on Mohawk's indoor stage you can catch Wedding Dress, who have a good emo resume with members of members of Maps & Atlases and Joan of Arc, and proggy Austin locals Boyfrndz.

On Friday, when FFF starts in proper, you can see Knapsack and Mineral once again. They play the Orange Stage at 2 PM and 3:10 PM, respectively. After that, head to the Black Stage at 5:15 where The Blood Brothers are playing. They also just reunited this year, and have played less than 10 shows since coming back back so far.

At night, you can go see The Blood Brothers again when they play a Nites show at Parish. They'll be joined by two ripping Canadian bands at that show, METZ and Single Mothers, who are more straight up punk than "emo," but they fit well and Single Mothers definitely spill their guts in their lyrics. Austin's Residual Kid are on the bill too.

Another Friday night option is catching The World Is A Beautiful Place & I Am No Longer Afraid to Die and The Hotelier, two killer new school bands, at their Nites show at Holy Mountain (outdoor). Thieves are on that bill too.

One more solid choice that night would be heading to Red 7 (outdoor), where the post-hardcore shapeshifters Self Defense Family open the night at 10 PM. It gets significantly less emo after that, but what, are you really going to leave before Sick Of It All?

On Saturday, start your day at the Black Stage at 2 PM when Glassjaw go on. They haven't put out an album since 2002's great Worship and Tribute, but they did return with an EP in 2011 that proved they've still got it in them. Then you can catch METZ again on the same stage right after them. After that, the emo continues on the Yellow Stage at 5:15 with The World Is A Beautiful Place. To wrap up your day, head to the Orange Stage where Modest Mouse headline at 8:30 PM. Not that they were ever on Jade Tree or anything, but they did play with Brand New this year...

Not really any emo options Saturday night, but a good option would be heading to the Nite show at Red 7 (outdoor) where Rocket from the Crypt play. They're more just rock and roll or punk, but singer John Reis spent time in Drive Like Jehu and there's no emo like we know it without them. Plus this is another rare reunion show.

For Sunday, the final day of the festival, it's probably a good call to start early at the Orange Stage where post-rockers This Will Destroy You play at 12:30. Next up on Sunday would have to be Deafheaven at 3:40 on Black Stage. Though the arguments are endless about whether they're black metal or shoegaze, they fit in with the post-hardcore side of the emo revival really well too. Not to mention those guys are big Thursday fans. After them, stick around Black Stage for a 5 PM set from another killer veteran band, Hot Water Music. After them at 6:10 on the same stage is Gorilla Biscuits. They're another one who aren't emo, but Walter Schreifels went on to form Quicksand whose mark on the genre is undeniable, so don't miss this set.

Next, it's pretty much between Rocket From the Crypt at 7:25 on the Black Stage and Failure at 7:10 on the Orange Stage. Like we said above, RFTC aren't emo but they're connected to it, and Failure aren't either but their atmospheric rock can be heard in newer bands like Title Fight. No emo headliners on Sunday, but either Murder City Devils at 8:45 on Black Stage or Neutral Milk Hotel at 8:30 on Orange Stage would be a great choice and close enough.

Sunday night: see the Gorilla Biscuits again at Mohawk (indoor), but get there early enough to see the special opening set billed as: Ron and Scott: A Tribute to The Stooges featuring J Mascis (whose band Dinosaur Jr. plays their own Nite show on Saturday). Stay late for Ted Leo inside (ask him to play something by Chisel).