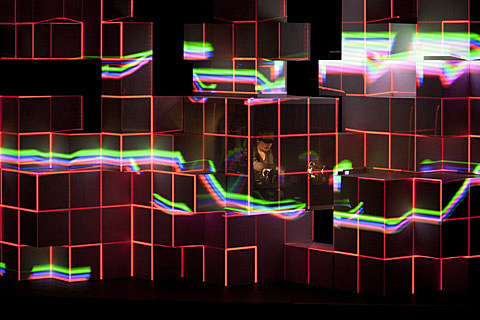 "Amon Tobin delivered what could only be described as electronic performance art. I had heard about his insane stage and visual production earlier this year and made it a personal goal to see what all the hype was about. A seemingly senseless barrage of sounds exploded out of the 3D edifice as Amon transformed the Mojave tent into his own personal spaceship. When an opaque window was suddenly illuminated to reveal that our captain was within one of the projection cubes the crowd erupted. This was EDM for the thinking-man, spectators watched in awe as the projection shot us through space. There was no 4 to the floor beat, no builds or drops, no pitchbends or wobbles - just a cacophony of noise. There really is nothing I can say to do it justice, no photo could ever represent the showmanship and risk that ISAM live takes." [Dancing Astronaut]

As previously reported, Amon Tobin began touring in light of his inventively- packaged, anthnology boxset this weekend at Coachella (if you weren't there, maybe you watched the stream?). The shows are another round of his geometry-bending 'ISAM Live' performances, which he'll bring to Europe for a brief stint after next weekend's Coachella, before returning for a full North American tour this September.

The tour hits Texas on September 24 at Dallas's Palladium Ballroom and Austin Music Hall on September 25. Artist presale ticket bundles are available for both dates with options including a copy of the "strictly limited" boxset due to release this May 21 via Ninja Tune. Regular tickets are also available for the Austin and Dallas shows now.

A full list of dates and a video preview for the boxset and tour, and a short clip from Coachella, below...