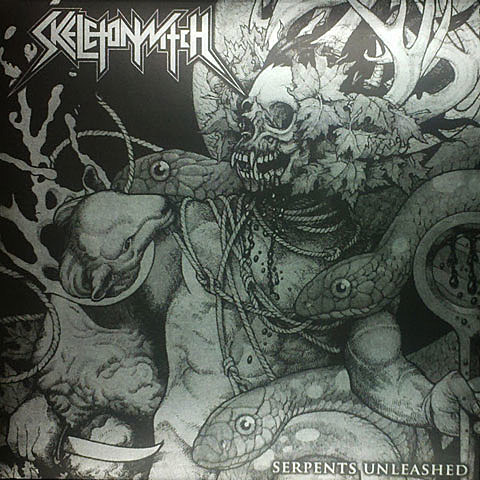 Sweden's melodic metal vikings Amon Amarth, who put out Deceiver of The Gods last year, are heading out on a tour this week that brings them to North America. Joining them are Norway's Enslaved and Ohio thrashers Skeletonwitch. The tour hits San Antonio on January 20 at Backstage Live, Dallas on January 21 at House of Blues, and Houston on January 22 at House of Blues. Tickets for San Antonio, Dallas, and Houston are on sale now, AND we're giving away tickets to every stop on the tour. Stay tuned to Invisible Oranges on East Village Radio every Tuesday night for your chance to win.

SKELETONWITCH will release a hand-screened, 180-gram limited vinyl edition of their acclaimed, Billboard-charting 2013 release, Serpents Unleashed, of which 100% of the proceeds will be donated to two animal shelters in the band's home state of Ohio -- The Athens County Humane Society and Columbus' Pets Without Parents. The members of Ohio's most-loved heavy metal group have always been proud pet owners and are excited to raise awareness and support for two no-kill organizations in their region.

Limited to a one-time-only pressing of 100 copies, the black LP includes a hand-screened, hand-numbered jacket with exclusive artwork and a hand-screened dust sleeve. It comes with a color poster and a sticker showcasing the album's original masterful artwork by John Baizley (Baroness, Kylesa, Kvelertak), as well as a download card. Mark your calendars, as the limited-edition LPs will go on sale on a first-come, first-serve basis exclusively via http://www.skeletonwitch.com on Monday, January 20th at 1:00pm EST.

Full tour information and more at BrooklynVegan. Check out the title track to Amon Amarth's latest album below...