Amanda Palmer in Brooklyn in May (more by Bryan Bruchman) 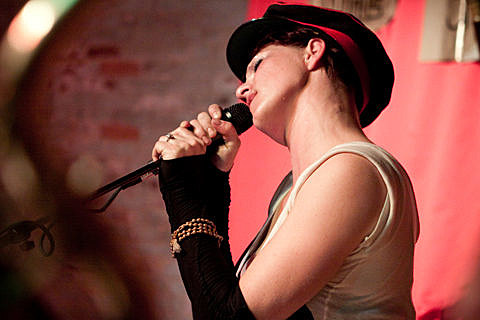 The previously mentioned Amanda Palmer show at Stubb's happens tonight (9/19), and tickets are still on sale. Since we last spoke, openers have been announced for this show, they are The Simple Pleasure, Jherek Bischoff, and Ronald Reagan, who are all also on tour with her. Jherek is also a (paid) member of her band. She also plays a FREE in-store performance at Waterloo Records today at 4PM.

In related news, you may have heard about the ongoing controversy about Amanda Palmer asking musicians to volunteer their time on this tour, that led to an ongoing conflict with Steve Albini. He voiced his displeasure when she decided to ask musicians to perform on her tour for free, and she responded in length. Steve then cleared things up after news headlines erupted that he "called Amanda Palmer an idiot." She followed that with another blog post where she took the side of NPR intern Emily White, who blogged a few months ago about how she rarely buys her music. Steve then continued the conversation in a Q+A with The Stool Pigeon.

UPDATE: Amanda is now paying all of her volunteer musicians