Allo Darlin' at MHOW in June (more by Jessica Amaya) 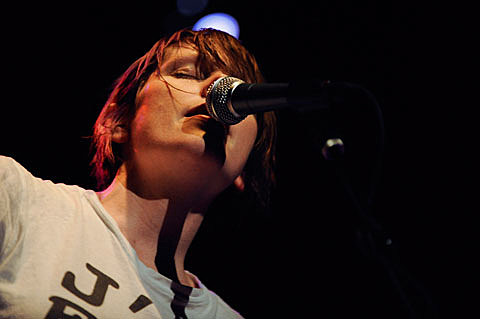 We've had some sad news over the last couple of days. The girl in the picture above was Esme, a dear friend of our friend Herbie, who is also pictured. Tragically, Esme was murdered in her home after a New Year's Eve party in Austin, by all accounts attacked by a stranger who also attacked two other women that night.

It seems like Esme was one special girl. News of her death was showing up all over the internet from people who had no connection to each other but a connection to her and to us. She meant the world to the people who knew her, and their expressions of love and grief have really touched us. She worked with special needs children and also worked as a camp counsellor and mentor at Girls Rock Camp in Austin.

It turns out Esme was a fan of our band, and if our tour in the South West hadn't been cancelled because of our visa problems last year, it's more than likely we would have met her.

This morning we were sent pictures of tattoos that some of her friends have got in memory of Esme, with some of our lyrics written in ink on their skin. This has moved us very much also.

In New York City a benefit has been organised to help Esme's family pay for her funeral. If you live in New York, details of that show are here.

If you'd like to contribute to Esme's funeral fund, you can do so here.

Our love and thoughts go out to all of Esme's friends, some of whom are our friends, and also to the ones we do not know. We're looking forward to hanging out soon.

Look after each other

Allo Darlin' will come to Austin during their just-announced North American tour with fellow UK band The Wave Pictures. That tour hits Moahawk on May 1. No advanced tickets at the moment, but check Mohawk's site for updates.

Both bands will be touring in support of new albums and the single from Allo Darlin's album, "Capricornia," made its premiere on BrooklynVegan earlier today. You can listen to it below. All dates and more at BrooklynVegan.