UPDATE: Check out the full lineup WHICH DOES NOT INCLUDE BON IVER (the card was fake)

Bon Iver at an ACL taping (more by Tim Griffin) 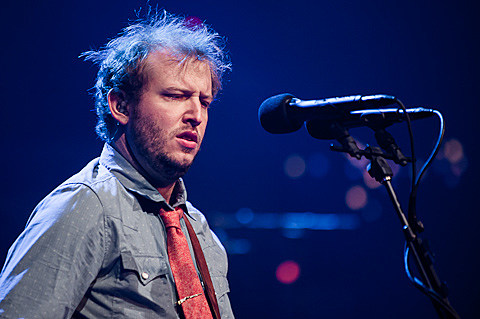 This past Friday (5/18), we posted that Red Hot Chili Peppers are playing, due to a lotto ticket that appeared on ACL's Facebook page (and it's still there). CoS is however reporting that the ticket is a fake and the ACL publicist has confirmed the same to us. Does that mean they're not actually playing? Is there some kind of conspiracy going on????? (Does anyone even actually care?) ACL Mike says:

Flea and I discussed this, among and other things, and the truth? Well, I'm not sure if you can handle it.

An excerpt of our conversation:

Me: So Flea, what's up in October?
Flea: Hey buddy, we don't hang anymore, it's like we're drifting apart. What's up with THAT?!

UPDATE: They are in fact playing. Check out the full lineup.

The date would certainly fit in RHCP's schedule. Stay tuned for the full lineup announcement in less than 24 hours to find out..