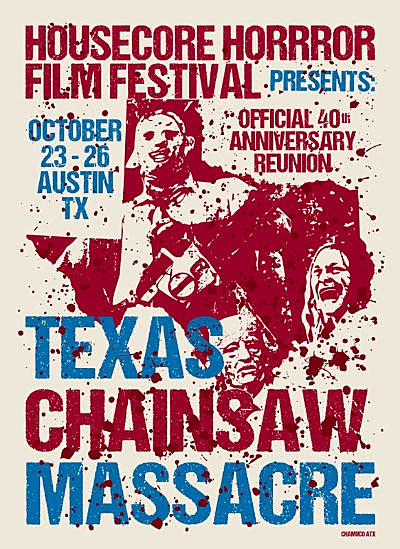 In 2013, a phone call between Mitchell and Anselmo led to the brilliant idea to bring Italian soundtrack maestros, Goblin, to the United States for the first time to score Dario Argento's classic giallo SUSPIRIA. It led to two nights of Goblin performances and the band's first-ever United States tour after more than 40 years of existence.

In 2014, yet another phone call led to yet another crazy idea to make HHFF even bigger this year. Mitchell was speaking with HHFF staffer Nic "Machine" Brown about what films to screen at this year's festival and, of course, the conversation immediately honed in on the 40th anniversary of the most important film in Texas history, THE TEXAS CHAIN SAW MASSACRE. Mitchell told Brown that it was imperative that we bring TXCM back to its old stomping grounds of Austin, Texas. Brown agreed and set out to find everyone in the film that was still alive and asked if they would join Anselmo in his own world of mayhem. ALL of the living members of the main cast agreed to appear at HHFF '14 and they include:

Scream queen legend Marilyn Burns added, "I am looking forward to the 40th year reunion in Austin where it all began! Who would have ever imagined TXCM is still going strong?"

Anselmo is blown away that the entire living cast will be at HHFF. "TEXAS CHAINSAW MASSACRE is such an incredibly important film, not just horror film, and to have all of these amazing people come to Housecore Horror and share this incredible anniversary with me and all of our friends is simply mind-blowing!"

Co-promoter Tammy Moore of Metal Morgue Productions added, "It's a real honor that the cast has chosen the HHFF as the location for their historic reunion to celebrate such an iconic horror film. We're thrilled!"

Expect the cast to eagerly participate in supporting their film. They will be at HHFF all weekend and participate on panels about the film, a Q&A after the screening of the film, as well as signing autographs and taking pictures with their fans. Many more bands, special guests, films, and special events to be announced over the next few months.